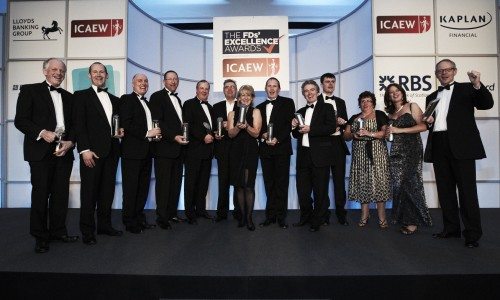 Britain’s up-and-coming generation of finance directors have been identified alongside their key service providers with the announcement of the full shortlists for the FDs? Excellence Awards 2012.

Held in association with ICAEW, the FDs’ Excellence Awards recognise the best-performing FDs from quoted and privately owned companies in the UK, as well as the service providers that support Britain’s finance community.

Created by Real Business, supported by the CBI and in partnership with the London Evening Standard, the FDs? Excellence Awards are the biggest national programme celebrating excellence in financial management.

The full shortlists are as follows.

FD of the Future:

Private Company FD of the Year:

Robin Fieth, ICAEW executive director, said: ?The breadth and depth of young talent we have seen is hugely encouraging. By recognising the best young FDs in both the quoted and private sectors, we are giving them the opportunity to showcase their abilities, as well as creating a wider set of role models. It isi mportant to recognise and reward our young talent early on in their career, to encourage them to go on to bigger and better things, as well as setting the bar for other aspiring finance directors.?

The FDs’ Excellence Awards also recognise service providers to UK finance directors and finance teams – auditors, banks, financial software providers, recruiters. The winners are based on the annual Satisfaction Survey of UK FDs (which this year had a record 1,100 responses). The shortlists are as follows:

Recruitment Firm of the Year:

Business Bank of the Year:

Auditor of the Year ? SME:

The “FTSE FD of the Year” shortlists for FTSE 100, FTSE 250 and Smaller Quoted FD of the Year were announced last month, and included finance directors at Burberry, BSkyB and Sports Direct.