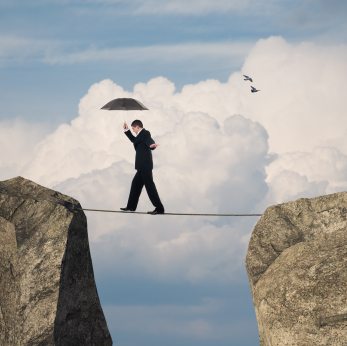 We have become obsessed with risk in the last few decades. Greater knowledge in medicine forces down our throats the risks of smoking, drinking, eating and exercise habits. Our lives will be cut short, should we not follow the latest trends in thinking on butter versus low fat spreads. By the time we reach middle age, many of us, myself included, have been given a list of banned foods – due to one ailment that appears on the list of must-eat foods of another.

Once parenthood hits, the majority of us turn into devout followers of each of these obsessions, intent on our children growing up with maximum health and perfect behaviour.  The more aware we are, the more we fear. Not only do we become obsessed by cheating death for as long as possible, but on a day-to-day basis, we become more and more afraid of sticking out from the crowd. In a society that lives increasingly in a public eye, where everything is publicized via the big old net, we are afraid of the risk of being seen to be foolish, and above all being seen to fail. If we stand out, someone somewhere may love us, but equally someone may hate us and that fear quashes all inclination to stand out. Few survive public failure. Our governments underline this and with increasing legislation endeavour to enforce good behaviour and squeaky clean drone living, taking power increasingly out of the individuals hands deeming them incapable of deciding how to spend their own lives and what risks to take. The education system supports this, obsessed as it is by reaching its goals and statistics that there is no room for anything other than force feeding of pre-conceived thoughts and ideas, so there’s no ability left in the individual to think for themselves. The litigious society has frozen our advisors from being able to advice ? the surgeons are indeed too afraid of being sued. Our advisors are so heavily monitored and legislated, they are not actually able to offer real advice anymore. So, we have a conundrum. The governments want us to now turn out generations of entrepreneurs, yet the financial world we live in is uncertain and banks are the most risk-averse of all. Investors are shaking in their boots. Not only is the finance not available, but the new generations are too risk aware and risk aversion is the biggest killer of innovation. The risk-aware are too frightened to think outside the box. Speaking personally, I now know that no-one on the right side of sane would have advised me to take many of the risks I took in the early years of business, financing a factory on an exorbitant loan from the back of a Sunday paper, when no-one else would give me the money. Had I not done so, more people would have been out of work, and less revenue would have been generated for the government coffers. Britain was not built on risk aversion. We are a nation with a proud heritage of risk taking, led perhaps most by our intrepid explorers who built up the commonwealth ? were they pig headed, ignorant, arrogant? Perhaps, but achievers certainly. Our athletes do it when they compete ? they risk the failure in the public eye, they refuse to accept pre-conceived boundaries. I don?t think Sir Walter Raleigh was worried about having too much butter on his bread or having a second tanker of ale while he waited for the Armada. Britain?s of old were aware that life is short, that you need to fight for what you believe in, and risked going down in the history books as complete failures. Fear breeds mediocrity in a way nothing else can. Legislation, indoctrination and litigation paralyze us with fear. We will not generate a true nation of entrepreneurs until we concentrate our efforts to champion the individual again, re-encourage attempting the impossible, and praise people for having the guts to try rather than just for winning. Jan Cavelle is founder of the Jan Cavelle Furniture Company.