We’ve got people waiting to get into the country through immigration at Heathrow Airport for two and a half hours (a few months before the Olympics have even started) and others hanging on the phone to Her Majesty’s Revenue and Customs for up to an hour.

Figures released last week said people calling HMRC had their call waiting times increase by two and a half minutes to around four minutes, but the Low Income Tax Group’s mystery shopping exercise last month revealed that after Easter this year calls took between 30 and 60 minutes to be answered. I’d be inclined to believe the Low Income Tax Group over the “official” figures!

On top of that, there are the perennial complaints about energy companies and how important your call is to them while you waste hours of your life trying to get through.

So, why is it okay for these organisations to stick us in a queue longer than Pavarotti’s belt when businesses in the real world are doing all they can to keep customers and keep them happy?

They say that at peak times they are put under pressure. Well, I can proudly say that while London was being battered by the worst wind and rain we’ve experienced during any drought (?) Pimlico Plumbers had the busiest weekend in our 30 year history. We took and handled twice the number of emergency calls in that two day period – even more than 18 months ago during the bad freezing winter.

We handled the pressure. We answered all the calls quickly and got our engineers and roofers to the job as quickly as possible. Why? Because, as well as saving Londoners from plumbing emergencies, that’s what we have to do to help our customers and make this business a success.

We’re continually told by politicians and business gurus from the corporate world that, during a recession, the best way for a business to survive is to deliver the best possible customer service. It makes one time customers turn into repeat business and be the best referral tool any company could ask for.

To paraphrase for a family audience – “no sugar, Sherlock!”

It sounds, and really is, simple common sense, but these public bodies and big firms acting like former nationalised monoliths are not matching what their private sector SME cousins are doing.

And that drags the country down. It makes those visiting the UK sceptical about our ability to do business with them and whether we have the infrastructure in place to serve their operations. I’m sure they have plenty of time to think that over while they’re in the queue at Heathrow!

The urban myth says the British are good at queuing – maybe because of our historic good manners and temperament – but we are being taken advantage of by these big companies and public services.

They have to smarten up their act quickly because we cannot afford to wait to save the economy. 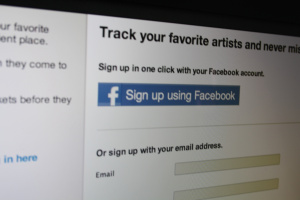 How social login can help you understand your customers