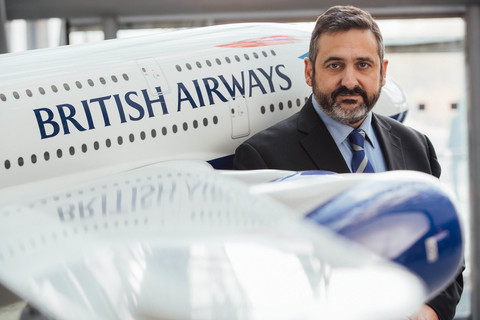 Share via
British Airways is just 15 months away from celebrating its 100th year. That’s a century of connecting London to the world, something the aviation industry staple sees as its core business to this day. While BA is decidedly quiet on the topic of Brexit, the company’s chairman and CEO, Alex Cruz, believes that economic uncertainty aside, BA’s position as a British heavyweight will remain unchanged. “Next year may bring some uncertainty in the country as we go through the beginning of a process (Brexit). What I can guarantee you, is while we sit here and look at the business plan, British Airways will be one of the assets that you can rely on,” Cruz said at the sidelines of an SME event in Leeds, Buy Yorkshire. “We will continue to hire 3,000 to 4,000 people per year. We’re going to continue investing in our fleet, and fly to more and longer destinations. That’s just the business plan we have at the moment,” he added.

“We’ve run all those consultant scenarios of what would happen if it all goes wrong, and yet we believe in this message. We will be a reliable asset to this country, whatever happens.”

Standing still is not an option, said Cruz. BA has committed £4.5bn to modernisation, which Cruz believes is just a matter of course. “It’ll make a visible difference to us when competing. We’ve been investing on the premium side, but also the non-premium side.” For example in Heathrow Terminal 3, new services like family check-in counters have cropped up alongside the more high-end first class check-ins that take customers straight to the lounge. But those are arguably just cosmetic upgrades. Cementing these soft changes are wide-scale fleet refurbishments. “We’ve have brand new 777 refurbished planes every month between now and October. It makes a huge difference. Since January, we’ve increased our catering in economy significantly to feature generous meals. Beyond that, we’ve been investing in our bedding from The White Company, new lounges in Rome, Aberdeen and more for our premium classes. We’ll be opening new lounges every single month for the next 24 months.”

“The biggest project will be a new club class, which will come in next year,” he revealed cryptically.

“We are keen to increasing our network footprint. We are the airline that flies the longest and farthest, and to the largest number of places around the world from the UK. Even from a very congested airport like Heathrow, we’ve managed to do this. We just started to fly to Nashville, New Orleans, and are starting to fly to Seychelles.”

For Cruz, a major part of helping BA retain its competitiveness lies in managing change, which isn’t easy in the slow-to-change bureaucratic corporate world. “It really has been only the last few years where we’ve felt things change in the industry. Even when we make mistakes, it’s learning to forgive ourselves of those mistakes and learning from them.”

“The biggest challenge is understanding what part of our business needs to change in order to adapt to all these different things that are happening today,” he added.

This, he stressed, will be a defining point for big businesses.

Surviving in a world of competition and changing customer expectations

“If there’s a place where customer expectations are changing a tremendous amount, it’s the digital world,” he said. “If you’ve ever had a bad experience with Uber, Amazon, or Deliveroo, you’ll know what I’m talking about.” Cruz recalled a time when he called an Uber to take him to a pub in Hammersmith. “Great service. Got there on time. I was having a pint when I got an alert from my phone. It was the Uber bill for that ride, except they had charged me an extra £20,” he said. “The message also said ‘if you have any problems, click here,’ so I did. Two minutes later, my phone buzzed. It was another message from Uber saying ‘we’re really sorry. We’re crediting your account with the value of that ride’. Essentially, that ride was free. And that’s what these companies are doing to us, in terms of setting up service expectations.” It was that simple click-of-a-button interaction that appealed to Cruz and reminded him of how important it is to be responsive to customer needs.

“We’re learning to expect instant remedial action when something goes wrong. This is a huge challenge for us.”

“Digital is an attitude, it’s not a piece of software or hardware,” he said. “It’s an attitude that has to do with serving our customers better. We need to be extremely agile or someone else is going to be more agile and develop something that is slightly better than what we’re doing.”

The 10 week programme is positioned for start-ups to trial their products at scale, under the guidance and mentorship of IAG’s senior management team. The products are tested with IAG’s customers and the top performers have the opportunity to pitch for investment from the Group.

“We want to get into the thinking and culture of younger companies that are very quickly developing solutions that can ultimately be used by consumers. We’ve ran two session, and will start a third in London this year,” Cruz said.

“Young entrepreneurs constantly challenge the British Airways staff. They come in with their brand new technology and zero patience. These are good challenges.”

“We’re also investing in hardware that can make your trips safer and more reliable,” he added, outlining the biometric check-ins and automated vehicles in BA’s arsenal, which he says are “ultimately safer than a human being.” “BA is not the type of airline that will eliminate people from the process of managing people. That would be a grave mistake. If we have to provide a service to people, we must have people. We don’t need five or six agents to check you in, but we will need three to work just fine.”