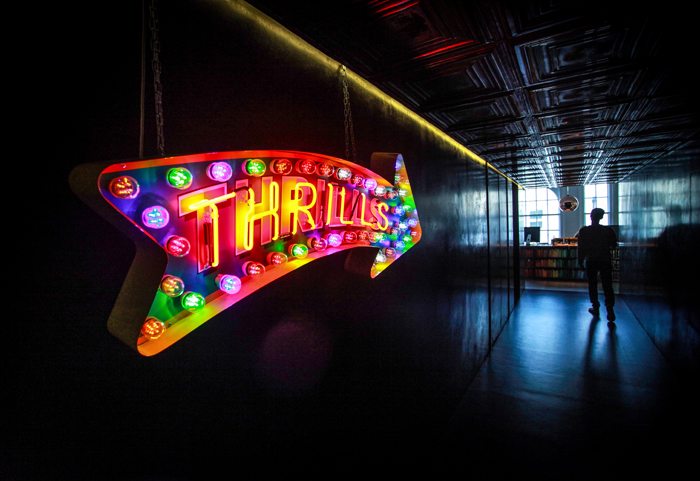 Share via
They say fortune favours the brave, and that’s certainly the case for London-based creative agency Bulletproof. One of the biggest challenges in a company’s formative years is winning business, made difficult by a lack of track record, previous work and small resources. When Gush Mundae and Jonny Stewart came together in 1998, the two had a very clear idea of what kind of services they wanted to provide and the way in which that would be done. Now they just needed that first big client to build momentum. “I had a fax machine and a Mac, bought with saved-up money,” Mundae remembered. “We knew it would be a hard slog in the first year – knocking on doors, picking up the phone and going through Yellow Pages looking at marketing and brand businesses.” Fortune came in the form of a call from Coca-Cola after one of the duo’s “hundreds of mail outs” landed on the desk of a graphics manager there who just so happened to have been given a brief to find new agencies. “I think she liked the fact we didn’t have this glossy agency veneer, that it was just us,” Stewart suggested. “And we’ve never deviated from that approach. It’s now just a collective of people. People who we want to be themselves. If they are, and are comfortable, then they are confident.” This approach to empowering employees to think for themselves and do great work dates back to the time Mundae and Stewart spent studying together at college. With Mundae gravitating towards the design side and Stewart advertising, the baptism of fire the two received in pitching ideas not only got them ready for the harsh realities of a notoriously competitive industry but also served as the inspiration of their company name. “Our course taught us about ideas, the heart of every great creative campaign,” Mundae explained. “They’d put you in front of the whole team, advertising and design – 40-odd students and five shit-hot lecturers – and you’d have to hold your ideas up to everyone. “Then they’d literally shoot them down, one by one, so you’d need lots of different ideas. Eventually, what they were doing was making you think about the consumer, the product, the brand, the marketplace. When you did eventually hold up an idea that worked it was bulletproof.” Despite Mundae being the person who made the first jump, knowing in his heart of hearts that he only ever wanted to work for himself, the two are firm in the belief that their affinity in thinking brought them together and created a working environment that still exists to this day. “We are very different, but also complimentary at the same time,” Stewart said. In explaining the decision to leave his well-paid job in advertising to join Mundae on a much lower figure, he added: “Advertising was not all it was cracked up to be, especially in those days. It was a really attractive offer – a chance to be part of a business that had real principles. “We’ve never stolen a client from anyone. That honour is part of our culture, we have honesty and a very simplistic way of doing things.”

Despite Bulletproof having a client roster that includes Coca-Cola, Diageo, Cadbury and PizzaExpress, Mundae and Stewart were quick to rubbish any suggestion that they had “made it”. “We are not very retrospective,” Stewart commented. “But being entrepreneurial, which I actually don’t consider myself to be, we’re always looking forward. Being ‘successful’ doesn’t sit easily with any of us. I don’t think you can ever consider yourself successful if you haven’t achieved what you want to do – which I guess means we’re damned forever because of an impatience to do just that.” This approach to building a business and serving clients is brought to life by a mural that resides on the wall of Bulletproof’s London office. Produced by illustrator Vic Lee, the mural’s central message is brutally clear – “get shit done”.

The entire message reads: “We are a fiercely independent force of nature. A tribal tornado of instinctive intelligence and symbolic actions. Fuelled by synaptic soul power, not the faint of heart or weak of mind. Marching to the beat of our own drum, bonded by blood, sweat and tears. We vanquish mediocrity and get shit done.” The tribe Bulletproof’s message refers to is its workforce, which now numbers over a hundred across offices in London, New York and, most recently, Singapore.

“We recruit two ways,” Mundae said. “One is talent and the other is experience. With talent we are buying much more junior members of the team, and it’s less about experience and more character and heart. They need to have the right attitude, commitment and are interesting. “When it comes to experience, that is different. There we need four of five interviews, with the last one being with Jonny or I at the end.” Bulletproof has no specific system for recruiting, Stewart said, beyond trial, error and interviewing people. “People will go through a four or five-stage process, but even then we don’t know if they’ll be right as they need to immerse themselves in it. “We are a bit like Marmite, some will love us and want to be here for ages. Others will not find it their cup of tea, and will migrate back to the WPPs of our world. But when people do immerse themselves, when we really like them, we go back to that theme of a generation ago when people stayed in one business for their whole career. “We can say to people, if you want to do a stint in New York then let us help you do that. Don’t leave to go to another agency in New York.” The only culture Mundae and Stewart ever wanted to create was one where “people come first”. That began when, in the company’s early days, everyone broke for lunch at the same time. The youngest person in the “tribe” would go out to get lunch for everyone, and in return would get theirs for free. “It’s through that very basic human culture that we all thrive. When you have that you create a solidity through the simple union of breaking bread and working late together,” Mundae said. “You have to get on and like each other if you’re going to do 18-hour days.” Taking their business and setting up in two new continents has undoubtedly put a strain on retaining that all-important company culture, but Mundae and Stewart both believe they have cracked it without being insensitive to new environments. “We were very cognisant that British agencies have taken what was created in London and transported it lock, stock and barrel to the US market. You can see that from a distance and that’s arrogant,” Stewart said. “US clients don’t want a plummy British agency, so you need to get the nucleus right and then allow that to serve as the genesis – creating something in your vision, but in the same instance allowing it to become its own.” Mundae remembers having conversations with US-based clients about setting up shop in New York. “They all said they’d give us work, and then none of them did! All those best laid plans went to pot, but we found ourselves over there and really liking it.” Their approach to establishing offices in challenging new environments seems to hark back to the early days of Bulletproof itself – build it and they will come. This fearless approach is clearly something Mundae and Stewart share, backed up by a commitment to great work and innovation. There seems to have always been an element of beg, borrow and steal (except clients) in the Bulletproof journey. Never being afraid to hustle.