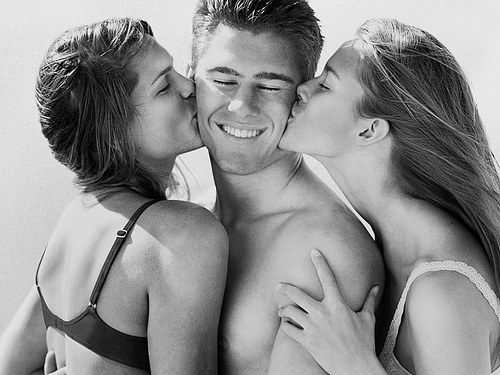 (1) Why should larger people be able to wear Abercrombie clothes?

Abercrombie & Fitch is adamant about not selling to larger women – and its stuck to its guns despite the outrage this decision has caused. In fact, size 10 is the biggest pants size women are able to buy. Taking the attitude of CEO Mike Jeffries into account, Robin Lewis, co-author of “The New Rules of Retail,” claimed the brand’s exclusion of plus-sized women comes as no surprise. In 2006, Jeffries claimed the brand was built around sex appeal and his opinion has yet to change. “We don’t market to anyone other than the good-looking kind,” he said. “In every school there are the cool and popular kids, and then there are the not-so-cool kids. Candidly, we go after the cool kids. We go after the attractive all-American kid with a great attitude and a lot of friends. A lot of people don’t belong in our clothes, and they can’t belong.” Lewis further added that the store didn’t only seek to attract “the beautiful” but the thin as well, which has had an impact on its hiring policy. “He doesn’t want his core customers to see people who aren’t hot wearing his clothing,” Lewis said. “People who wear his clothing should feel like they’re one of the ‘cool kids’.” This comes at a time when brands have started featuring “real-sized” models. Take, for example, Dove’s “Real Beauty” campaign highlighting women who aren’t as thin as traditional models. What has also posed controversy is the fact that only women aren’t allowed to wear large – XL and XXL size options are offered to men. Lewis did suggest, however, that this was due to it trying to appeal to “beefy football players and wrestlers”. –––––––––––––––––––––––––––––––––––––––––––––––––––––––––––––––––––––––––––––

Urban Outfitters is no stranger to controversial shirts. There was an “eat less” shirt which encouraged customers to consume fewer calories – people dubbed it the anorexia-encouraging shirt. And who can forget when it tried to sell what it called a Kent State sweatshirt. While that in itself isn’t controversial, it’s the fact that it appeared to be splattered with blood stains. Factor in the fact that in 1970 the National Guard killed four Kent State college students and injured another ten then you start to see a different picture. What kicked up a lot of fuss as well was a certain colour the company decided to stock shirts in – and the explanation that came after the faux-pas was revealed. In 2010, when Jezebel editor Anna North was looking through Urban Outfitters’ online catalog, she noticed that one of the shirts for sale was being marketed under two colour combinations: “White/Charcoal” and “Obama/Black.” Yes, really.

Urban Outfitters said it “screwed up”, saying: “Many customers have brought to our attention one of the colour names listed for our BDG Burnout Henley, and rightfully so. We screwed up, and are sincerely sorry. The burnout pattern on this shirt is comprised of two colours – one is an internally developed colour we called ‘Obama Blue’ and the other is ‘Black.’ Unfortunately our website database truncated this combination to read ‘Obama/Black.’ We should have caught the error, and apologise for offending anyone. “Fine, Urban Outfitters: You’re not racist, just careless,” said University Chic. But given your history and penchant for making controversial political statements, Chis said, “you can’t blame anyone for assuming” the worst. Did you know Harrods removed the Queen’s royal warrant from its wall and had it burnt? Find out why.
By Shané Schutte