Skip to content
Interviews
Share via
In its survey of over 1,000 small and medium-sized businesses (SMEs) for the fifth consecutive quarter, Amazon?s SME Growth Tracker revealed that, despite weak business confidence, leaders are ?upbeat? about growth prospects. ?We?ve seen noticeable changes to the confidence of SMEs after key moments in the political calendar over the last year,? said Mark Pragnell, chief project economist at Capital Economics, the firm responsible for putting together the report. ?A year ago shortly after the EU referendum vote, SME confidence in their own businesses was positive. However, over the last 12 months SMEs have witnessed a series of key political moments, from the triggering of Article 50 through to the snap general election, which may have contributed to the swing of business confidence from +5 in September last year to -8 now. “It however remains encouraging that they continue to forecast positive revenue and jobs growth in the year ahead.? The report?s SME Confidence Index, relating to the respondent?s own company, fell to -8 from +5 in September 2016. Furthermore, the SME Confidence Index score for the UK economy dropped from -13 to -22 over the same period. Despite this, SMEs forecasted an average of +1.6 per cent revenue growth, +0.6 per cent jobs growth and +0.9 per cent profit growth over the coming 12 months.

An overview of business confidence in the UK

Emma Jones, founder of Enterprise Nation, commented: ?The small business owners I speak to every day are generally positive, upbeat entrepreneurs who thrive in the face of a challenge and are flexible enough to adapt to changes in the political and regulatory landscape. ?However, this doesn?t mean they should be taken for granted, so I hope the government looks closely at these views from the small business community and takes them into consideration throughout the Brexit process.? From the 1,000 responses, the SME Growth Tracker report concluded the greatest risk to growth over the next year is political uncertainty and higher price inflation. Respondents would like to see the government prioritise a new trade deal with the European Union over any other region or country to support the more than 50 per cent that export. Looking at business strategies linked to growth, the research found ecommerce use boosts confidence. Businesses selling through ecommerce expect revenue growth of +1.8 per cent tin the next year, compared to +1.2 per cent for those that don?t. Combined with exporting, digital sale are expected to account for over a third of export sales. Doug Gurr, UK country manager for Amazon, added: ?The annual report shows that small businesses want the ability to easily export to the EU and beyond. As a global business that provides UK businesses with access to international opportunities, we?ll continue to focus on tools and services that help SMEs export to the EU and around the world long-term.? 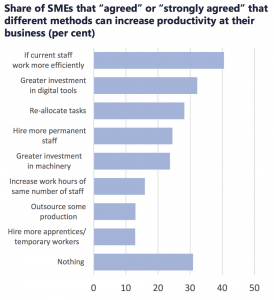 The research also asked SMEs which methods are best for increasing productivity ? the results of which can be seen in the table.?The best way, respondents said,?to increase productivity is if staff work more efficiently (producing more goods and services in any given set amount of time). Around two fifths (41 per cent) of those surveyed said they ?agree? or ?strongly agree? that this would increase their business productivity. The best way for this to happen, it was concluded, is through investing in training, with a score of 3.5.