Skip to content
Choosing Suppliers
Share via
Hoping to identify?and then rank which areas offered fast or slow broadband, Which??came upon a bigger?divide in download speeds?than it had anticipated. For starters, it would take someone in Ryedale twice as long to download a movie compared to someone in?Enfield. That’s because 11 areas ranked in the bottom 20 ? Ryedale is one of them ? fell short of the minimum download speed proposed by the?government’s?Universal Service Obligation (USO). While the USO?was intended to grant anyone the ability to request speeds of 10Mbps, the Orkney islands ? the area with the worst broadband ? offered a median download speed of 6.3. This was followed by the?Shetland islands (8.4Mbps), Highland (8.8Mbps), Ryedale (9.0Mbps) and Purbeck (9.0Mbps). The findings don’t bode well for Scotland, with the bottom three areas residing there, and only one location???Dundee City???featuring among the top 20. What’s more, certain areas within London seem to be suffering the same fate as rural locations, lagging behind the UK average of 17Mbps. Southwark had a median download speed of 10.4, while Westminster had 12.9Mbps and the City of London came away with 13.4Mbps. Here are the top and bottom 20 broadband speed locations according to Which?. 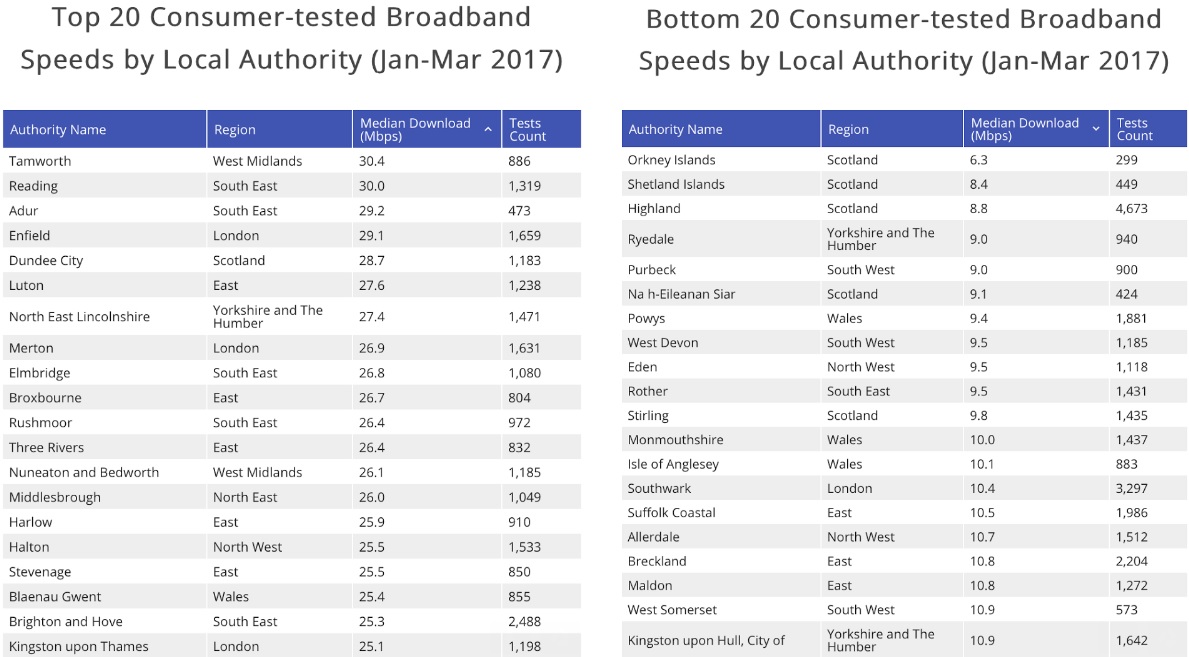 This follows?2016 research from uSwitch, which sought to find the UK?streets offering?slow broadband. It was revealed that it would take someone working or living on Williamson Road, Kent ? with an average speed of 0.54Mps?? 49 minutes?to download a music album. In comparison, it would take Sandy Lane, Staffordshire, residents?22?seconds. At the time, uSwitch’s Ewan Taylor-Gibson, said: “On the UK?s slowest street broadband speeds are so sluggish you could fly to the Bahamas and back again in the time it takes to download a film. “Likely causes include the user?s distance from the nearest exchange or issues within the properties themselves. Wireless connections can be affected by the thickness of walls, for example, but your broadband provider can usually offer a solution if that?s the case.” https://www.surveymonkey.co.uk/r/6G73ZGQ