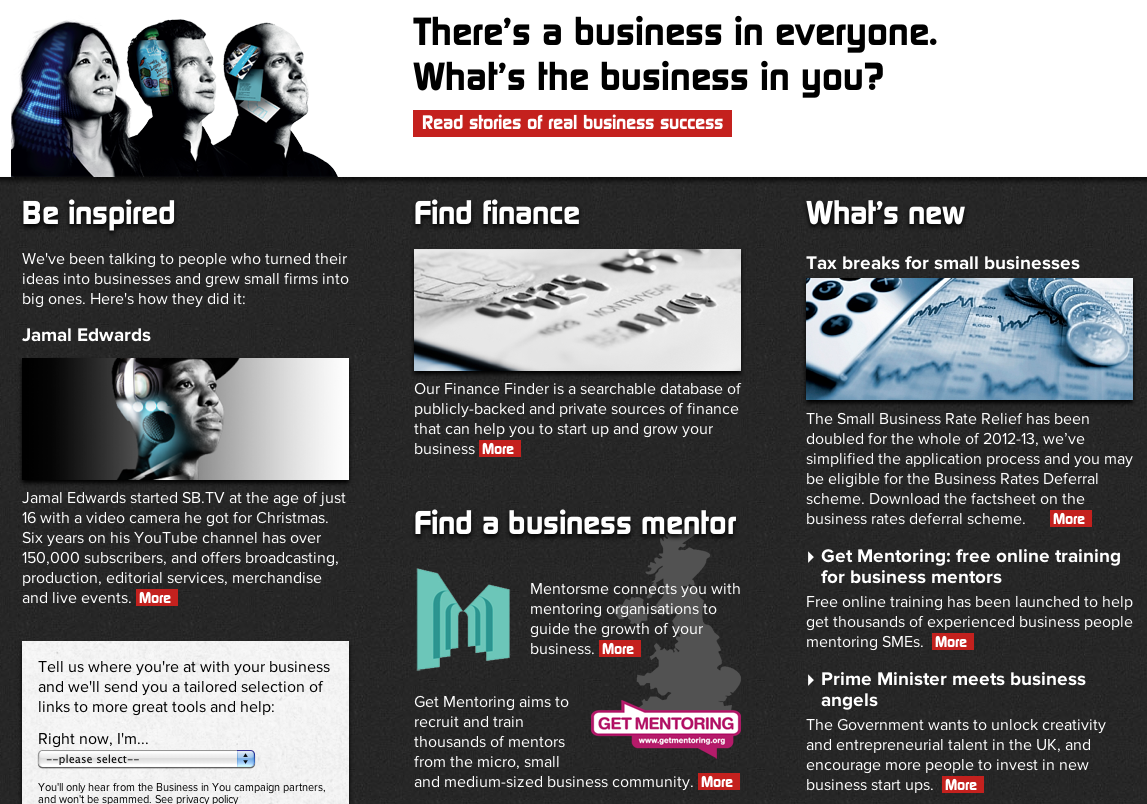 Share via
As co-founder of Moonfruit.com, I am supporting the government’s Start Up Britain initiative and its recent “Business In You” campaign which aims to show there’s a business idea in everyone. Now that I’ve gotten over the shock of seeing my face plastered on a billboard on the A4, I wanted to explain why these schemes are so important for entrepreneurs and growing businesses as well as the UK economy in general. Like most entrepreneurs, I am sceptical about initiatives” for startups and SMEs, and fatigued by a glut of patronising “how-to” guides. Many corporate-led outreach programmes are CSR- or PR-driven; while there’s nothing wrong with this in itself, it means that support for new businesses is often one-way and short-term, and ceases once the case study is published. Like a one-time charity handout, it does little to support a new business in its ongoing growth and evolution. I like action! So what’s different about “Business In You”, and why have I laid cynicism aside Firstly, challenging economic times have necessitated a more symbiotic relationship between the government and UK businesses of all sizes. While startups and SMEs still need the support of big corporations, larger companies can call on the agility and speed of smaller businesses. All businesses could do with the support of their government to help them be financially sustainable in difficult economic times. In turn, the government needs the support of its businesses, particularly entrepreneurs. According to the Federation of Small Businesses, SMEs account for 99 per cent of all enterprise in the UK, and nearly two thirds of private-sector employment. Put simply, the government needs us to help boost the economy and fight increasing unemployment, so it is within its interests to create a support network that makes a difference way beyond a political gesture. Increasingly, we all need a symbiotic business ecosystem to survive a positive, supportive environment based on “pay-it-forward” goodwill. It is this ecosystem that makes Silicon Valley such a startup hotbed, where each service provider plays a part in an ongoing and collaborative success story. I love the way lawyers and PR agencies are not afraid of putting skin in the game themselves and when one senior law partner stopped talking about time on the clock and warrants and instead about the “magic” in the valley I had to smile. David Cameron’s Tech City speech last year suggested that Silicon Valley could provide a useful model for more entrepreneurial Britain. I was sceptical about Startup Britain when it launched, but I’ve experienced their positive ecosystem in action: at the recent launch of Moonfruit ShopBuilder, the outgoing StartUp Britain CEO and founder of Enterprise Nation Emma Jones spoke at the event, PayPal lent us their auditorium and both organisations promoted it to their communities. Some 150+ SMEs attended. The government is also backing up its campaigns with a number of tangible measures. Its extension of the Enterprise Finance Guarantee System will help more businesses borrow the money they need, while the Startup Britain Marketplace aggregates offers, events and links for new businesses that are really designed to help. The MentorMe matching site will find you a mentor and the initiative the PM seemed most keen on when I spoke to him was the freeing up of unused government office space to provide new businesses with variable, low cost working space. It’s certainly a creative idea but logistically challenging. Partnering with experienced incubators/co-working spaces like TechHub, WhiteBearYard and Club Workspace would help turn this from an idea into reality, quickly. So while I understand why people could be cynical towards yet another initiative , I believe it’s up to us to take the steps to make sure “Business In You” is more than just hot air. Wendy Tan White is co-founder of Moonfruit.