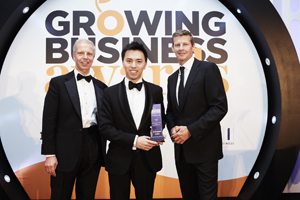 From flip flop makers and clearance stock to student communication, and gas and electricity; this list showcases the best of young Britain.

Here are the UK’s finest young entrepreneur’s and Richard Branson’s of the future.

99p Shopper, launched by Suelman Sacranie in 2011, specialises in the sales and distribution of discounted deals and clearance stock, online, via website Mad About Deals. It offers promotional deals delivered direct to retailers, helping save them both time and money. Its product range covers groceries, household goods, soft drinks, confectionary and alcohol. The company has already secured private equity funding and a ?150m nationwide distribution deal with one of the largest players in the industry. Suleman himself, who sold his first company – a software concept to teach children to stay away from guns and knives – at the age of 19, has appeared on BBC show Million Dollar Intern.

Rob and Paul Forkan were tragically orphaned in the 2004 Tsunami but they wanted to term the ultimate negative into a force for the good. In 2012, the paid established Gandys Flip Flops from their bedroom in Brixton. The flip flops are now stocked in just about every major UK retailer. Gandys is, however, essentially a social enterprise and the brother’s primary ambition is to use the proceeds to build their first children’s home, India, within three years of starting out in business. The brothers then aim to build at least one children’s home on each continent.

Rishi Raichura launched licensed commercial gas and electricity supplier Yorkshire Gas and Power in 2009, a year after launching energy consultancy business EE Solutions. Both businesses are run by Rishi with the support of just one part-time administrative employee. Rishi’s ambition with Yorkshire Gas and Power is to take on the big six energy providers at a time when soaring prices mean they are attracting increasing criticism. The phenomenal growth achieved so far suggests he is already on his way.

Three months into his university course, Steven Bartlett had grown frustrated with just how unconnected he was to the other 100,000 students in the city and it was at that point that he dropped out to pursue his venture. With no experience of building a website ? and no money to live on ? he buried himself in creating a product to bring this community together, eventually creating Wallpark Online. The concept has attracted huge interest and Steven was named ?speaker of the day? at a Virgin Media Pioneers conference. Wallpark Online has also attracted significant investment from major players in the industry. To find out more about the category or book a table, visit the GBA website.