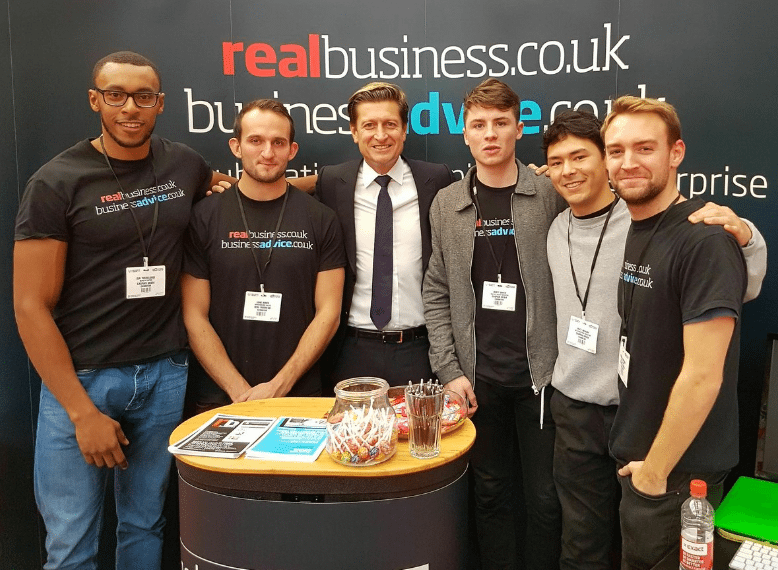 First things first – are you at The Business Show? If so, make sure you come and give us a warm hello at Stand 985. Don’t be shy, we’ve got Haribo and lollipops available – as well as a happy team that would be delighted to meet you.

We’re expecting a magical day at @TheBusinessShow – come and see for yourself at Stand 985 👌🃏 #TBS2016 @John_Bulleid pic.twitter.com/R8oLnUcEVU

Dynamo, eat your heart out.

We also attended a keynote with Crystal Palace FC chairman and owner Steve Parish, who gave a very honest and frank account of his involvement with the club.

The chairman of @CPFC Steve Parish is on stage at The Business Show and will be giving @Real_Business an exclusive interview after #TBS2016 pic.twitter.com/L25mrtR7Y5

During it, he said: “As a smaller challenger brand – you need to be smarter, better and happier than the opposition. People come to work to achieve things. It’s vert important that you have a happy and positive atmosphere.”

Hot on the heels of Parish, motivational speaker Brad Burton took to the stage at The Business Show to give his take on entrepreneurship and suggested the business world needn’t revolve around suits for success.

As a result, he was on stage to the sound of…

Not sure if a business pitch or rap battle is about to take place 🎤🎶 #TBS2016 #FridayFeeling @TheBusinessShow pic.twitter.com/arBP1fFh0g

Real Business actually got some time exclusively with Parish at our stand (985, remember) where we discussed Crystal Palace and what leaders can learn from him and the club. It was all streamed live on Facebook – check out the video on our page.

In the afternoon, Real Business editor Hunter spoke with Tea & Tequila co-founder Millie Wilson. She launched the company with her best friend – something she was warned against – and insisted it was a great decision.

“We had a friendship built on trust and respect for one another. You don’t need to doubt anything about going into business with that person – you can focus on driving the business and getting going,” explained Wilson.

“I was warned hat you can ruin friendships, but that isn’t something we’ve found at all. If you can find a friend who complements you way of working and they have expertise in an area you don’t have you’re combining two minds together.”

You can see what else she had to say about operating an exciting brand based around imports and exports in a video of The Business Show conversation captured via Facebook Live.