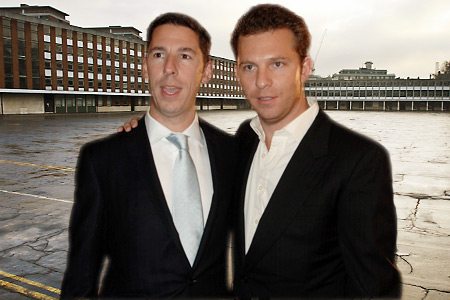 Share via
Billionaire entrepreneurs, read on. The £1bn One Hyde Park building in London’s Knightsbridge – a stone’s throw from Harrods – was unveiled yesterday. Celebritries including Lord Lloyd Webber, Holly Valance (Nick Candy’s squeeze), Bernie Ecclestone and Tamara Beckwith attended the development launch, ooh-ing and ah-ing at the plush new flats. Chefs Heston Blumenthal and Daniel Boulud rustled up food for the guests. The development includes three retail units totalling 385,000 sq ft and 86 residential properties with a starting price of around £20m. The four penthouses in the building have already exchanged hands for as much as £135m – one of them was snapped up by Sheikh Hamad al-Thani, the PM of Qatar. Buyers will get to enjoy communal spa areas, a gym, a golf simulator and a wine cellar, sweeping vistas of Hyde Park (viewed through bomb-proofed windows), waterproof TVs in the bathrooms, polished Breccia Paradiso marble floors and fitted Gaggenau coffee makers. Yes, we’re drooling too. Nick and Christian Candy – sons of an advertising creative and a drama school student, brought up in Surrey – have successfully turned the area once occupied by Bowater House into homes for the world’s super rich. The pair bought their first flat in Earls Court in the mid-nineties, with £6,000 loaned to them by their grandmother. They did up the flat, sold it, and bought another. And then another. Their property business snowballed and the pair started to specialise in dream homes for the ultra-rich. In 2008, they took possession of Chelsea Barracks in a deal which involved them and the government of Qatar paying the Ministry of Defence £900m. The Candy brothers now claim to be worth £1bn when all their assets and various interests are taken into account – but they have a lot riding on One Hyde Park. Their next challenge is to find enough billionaires to occupy it. Any takers?