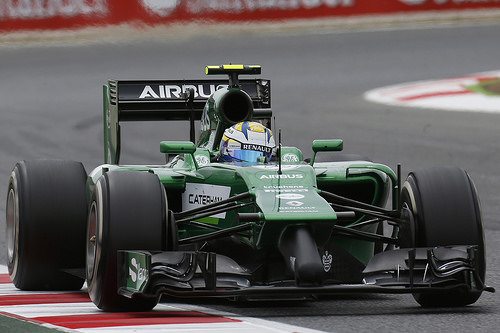 And earlier this month, bailiffs seized a test car, steering wheels and pit equipment – all of which the administrators are trying to reclaim.

Formerly known as Lotus Racing, Caterham F1 has yet to win a point in five years of competition. Spare on cash, and currently sit at the bottom of the FIA championship, its lack of success prompted Queen Park Rangers football club Tony Fernandes to sell the franchise and manufacturing company to Swiss and Middle East investors. But it seems like the new owners are struggling to raise enough finance to keep the company going. “Clearly, the parties who bought the business from Tony Fernandes have been unable to fund this company,” said Finbarr O’Connell, partner at accounts firm Smith & Williamson, which was appointed as administrator to Caterham Sports on Friday. “When it comes to F1 teams, you are normally dealing with one figurehead who is very much in the public eye. But, the current owners of the Caterham Formula One team are not completely clear to me as yet.” According to Smith & Williamson statement, Constantin Cojocar, who has been the company’s sole director and shareholder, “indicated in court papers that there was an intention that his associates would provide funding of £2m per week which would be used to pay the company’s creditors but that, unfortunately, the money promised by his backers did not arrive.” Image source By Shané Schutte