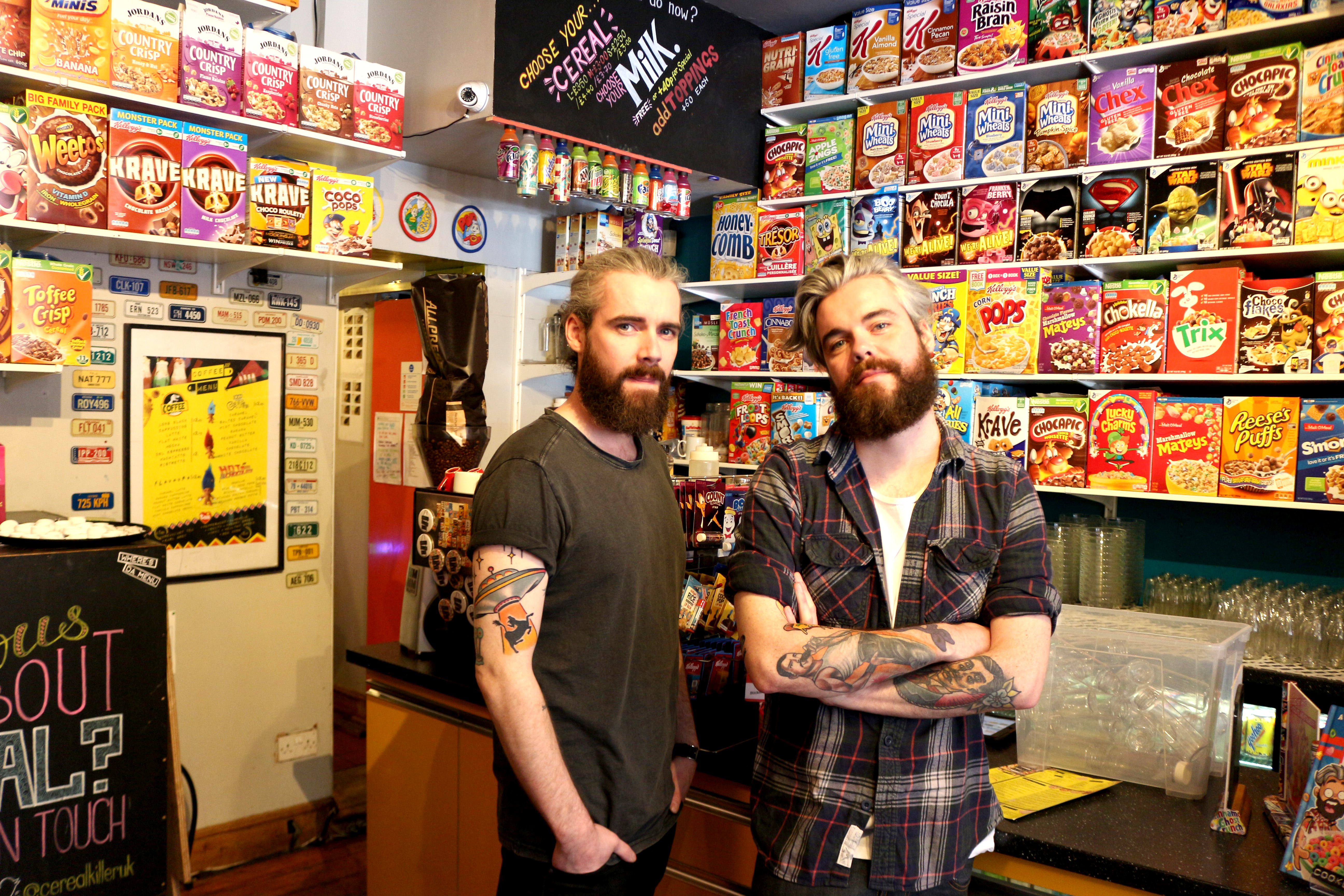 When the Irish entrepreneurial brothers said yes to Channel 4 visiting their new cafe in Brick Lane they probably didn?t think it would end in the way it did. Having been asked whether it was ?affordable for the area? in one of the ?poorest parts of London? they shut down the interview.

Soon after, a lynch-type mob descended on the site, protesting against what they called gentrification and over-priced bowls of cereal. The two can look back now with a smile on their face, but it was a scary situation because staff were stuck in the shop as angry dissidents camped outside. This wasn?t the first time someone had declared their concept a no go. When the two first decided to push forward with the idea for a nostalgia-inspired cereal cafe, giving customers access to cereals from all around the world, Gary was doing a small business course in East London. While what he learnt was quite basic, he was given access to a mentor at the end of the process. ?The business plan was only two or three pages long, but we sat down with him to discuss it,? they remembered. ?He slated it and said there is no way people will eat cereal after 10am and that we needed to do burgers or something else. We left that meeting thinking, what do we do now??

Undeterred, mainly because market research had told them the direct opposite of their 60 year-old mentor, they ploughed on. However, their life savings only took them so far ? and pretty quickly it was time to flesh out the business plan and visit some bank managers. ?We got turned down by Lloyds and Barclays for loans, and that was a mistake we could have avoided,? they told me. ?We went to the banks for loans but shouldn?t have. Sitting on the tube right after being turned down by Lloyds, and preparing to pitch to Barclays, we saw an advert for Virgin StartUp. We applied to it and they were really helpful in putting together the pitch before it went to the board.? In turning to Virgin StartUp, the duo turned their business plan into an 80-page document and were successful in getting the funds required to keep moving.

However, that wasn?t the last setback they?d encounter. Next on the agenda was finding a suitable property, and time after time they were turned down for both being a “startup” and saying that their offering would be a cereal cafe. ?Multiple times we saw a property that was in our price range and in the right location, but the concept of startup created doubt ? which then became an even bigger no when told it was a cereal cafe.? But it only took one landlord to put their faith in the Irish twins and they had their desired location in Brick Lane. Having researched what had already been done around the world with the cereal cafe concept, the two believed success would be found in making the experience of customers as important as what they would actually eat. Take a trip into either of the Cereal Killer Cafe sites today and you?ll come across a trip down memory lane for anyone who grew up loving cereal.

From beds with brightly coloured duvets to sit on to vintage arcade machines, both sites also have a wall dedicated to limited edition cereals and boxes. However, the two were quick to point out that they don?t just see their company?s future as being solely driven by new locations. As well as new licensing agreements in the Middle East, they also have plans to monetise the brand. ?We knew from the beginning that we were building a brand that was really strong,? they explained. ?We have a dream of making our own cereals, and are working on that. There is also a gifting range coming out at Christmas, and we?re talking to apparel partners to make clothing.? As a cafe-based business, it was surprising to hear the brothers refer to what they were doing as a “startup” ? normally a description reserved for a more tech-based enterprise. But it appears to all come down to their desire to get their brand in front of as many faces as possible, not just a bowl of cereal under their noses.

After first looking at franchising options, directed by the large number of requests they?d had before even opening the first cafe, the Keery?s ended up settling on the licensing model. ?Even before we opened we were getting lots of press, and then lots of people wanting to franchise,? they explained. ?We starting looking into it and ended up with a franchising agency that we didn?t get along with, it felt like they were taking us for a ride. After meeting with a lawyer who was recommended to us, he suggested going with a licensing approach.? The plans for licensing were ?finally? finished in January 2016, which involved a trip over to Dubai. Most of the franchising and licensing pipeline is populated by requests from the Middle East, something they put down to a strong liking for western brands and a big cafe culture. ?We weren?t going to pick anyone, they had to understand the brand. In the UAE, what we think happened was a Sheikh came over to one of our cafes and Snapchatted about it. Once that happened there was a lot more interest from the Middle East.? Their work in the Middle East has kept them busy during the last 12 months, so much so that they haven?t opened a new site in that period. That?s not to say they don?t have plans to open more of their cereal cafes in the UK, but the both remained tight-lipped about actual locations. The Irish twins have had to deal with criticism, both in the flesh and over social media, that is darker than a bowl of Coco Pops. But as the old saying goes, there?s no such thing as bad publicity ? and their brand and cafe concept has grown exponentially thanks to the internet and online chatter. So much so that they admitted their business wouldn?t exist without the internet. From humble beginnings, when they used to come home after working 80-hour weeks to a flat packed high with cereal box stock, it appears Cereal Killer Cafe has proven the naysayers wrong and possesses a distinctive snap, crackle and pop. The brothers have come a long way since our first interview with them, back in December 2014.