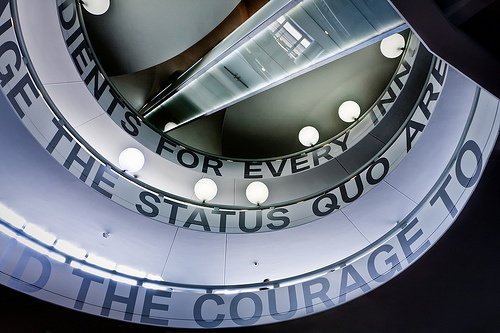 It’s one of the tell signs of a company that is stagnating, whose people are afraid to challenge the status quo and is certainly lacking innovative thinking.

One of the roles of a leader is to constantly look to ‘trim the fat’ and encourage those in their teams to seek out the incremental improvements that collectively deliver great results. As a leader, keep asking yourself and your team this one simple question… ‘Do we do this because we need to or because it is how we have always done things?’ Many years ago I heard a parable that describes this beautifully – sadly I cannot remember the source. The parable goes like this…. Imagine four monkeys in a cage. Now, place a bunch of bananas in one corner of the cage and every time the monkeys go to the bananas you spray them with water from a fire hose. You keep spraying the monkeys with the hose every time until eventually, they do not go to the bananas anymore. Once all of the monkeys have stopped going to the bananas, you remove one monkey from the cage and replace it with an entirely new monkey. The new monkey will then go to the bananas. When it does, the original three will jump on him to stop him going to the bananas. As soon as the new monkey stops going to the bananas you replace another of the original monkeys. Keep repeating the process until none of the original monkeys are left in the cage and none of the monkeys go to the bananas. Now, if you were to ask any of the monkeys why they do not go to the bananas they would say something like this… “I don’t go to the bananas because every time I do somebody jumps on top of me and beats me up.”  No mention of the fire hose! The new monkeys have never been sprayed by the hose but they still get ‘beaten up’ if they go to the bananas! The new monkeys don’t even know about the fire hose! Does this happen in your organisation? If so, what are you going to do to change it? Ben Morton works with TwentyOne Leadership. His broad range of experience is gained from working as a Board Member in small entrepreneurial organisations, time spent in large multi-nationals such as Tesco and TUI Travel along with five years as an Officer in the British Army. Image source