Job application rates in the UK boomed during January 2018, with a nationwide growth of 83.6 per cent compared to December 2017, CV-Library has found.

New Year, of course, generally prompts people to take stock of things they may have been delaying as they set out a batch of resolutions and targets for the year ahead. Indeed, previous research from CV-Library revealed 69 per cent of employees plan to look for a new job in 2018, supporting the rise of job application rates.

This new study suggests employees in certain locations have been keener than others to get the ball rolling on the job search, as Manchester claimed the highest spike of applicants.

The top ten cities that experienced a growth of job application rates in January are:

“It’s true that in recent months application rates have remained stagnant, with the ONS reporting that the unemployment rate was at the joint lowest since comparable records began back in 1971,” said Lee Biggins, founder and MD of CV-Library.

“This is not surprising given the current state of the economy, in which many are looking for stability from their current employer.

“But while the end of the year is traditionally a quieter time for recruitment, our Q4 job market report revealed businesses were still working hard to attract talented candidates last quarter.

“This determination has clearly paid off and candidates have come back in full force this January, with application rates seeing staggering increases across the UK.”

Considering sectors that benefitted most from the job application rates increase, marketing received a 93.1 per cent month-on-month growth, making it the most popular industry. Elsewhere, IT secured a 93 per cent rise, manufacturing 90.1 per cent, accounting 88.4 per cent and construction 87.1 per cent.

Biggins added: “This impressive data suggests that both candidates and businesses are feeling secure right now and we hope that these figures are an indication of what’s to come as we progress further into 2018.

“It’s great to see that advertised job vacancies also rose last month, with January traditionally being a busy time for recruitment. This is most likely because organisations will have received their annual budgets and are well aware that candidates will look for opportunities in the New Year.”

With a New Year here, professionals have listed their top career targets to accomplish in 2018. 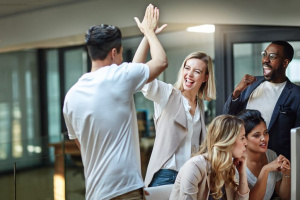