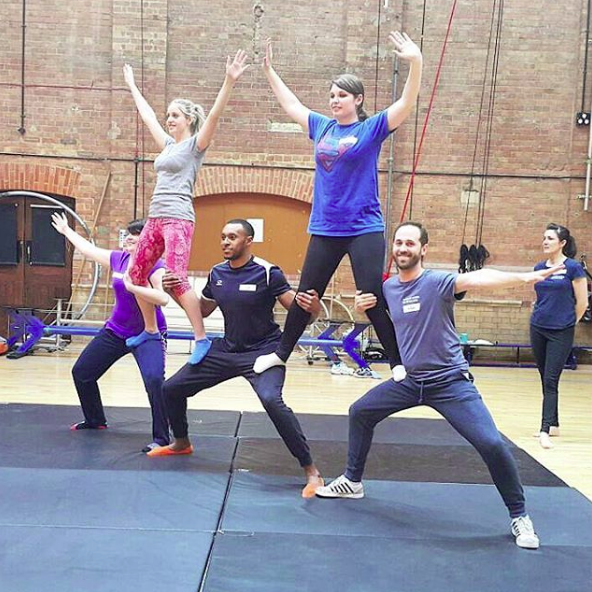 Based in a Victorian power station adjacent to Hoxton Square, the National Centre for Circus Arts is a registered charity which gains its annual income from grants and donations.

The organisation offers a BA Honours degree in Circus Arts, a training programme for those under the age of 18, and is able to ensure aspiring and established performers get development opportunities. But we?re far from being Cirque du Soleil stars ? at least we were? The Real Business editorial team was asked to take part in a team building experience that the Centre offers the business community ? and had the chance to see the venue itself up close and personal. While on a tour of the building, it was explained that the Centre had retained the features of an industrial space ? it was an electricity generating station in 1896. That doesn?t mean that it hasn?t seen its fair share of reconstruction. The building was saved from dereliction in 1994 and only became a facility for circus arts after going through an extensive restoration process. Of course, we got to see a few performers in action ? the facility is mostly used for rehearsal purposes ? which made it even clearer that we would soon be leaving our comfort zone.

Five alternative corporate away days to shake things up

And leave it we did; quickly. In addition to ourselves, there were other participants from various companies present, which resulted in a squad of around 12. To get warmed up, we were encouraged to take part in a series of exercises. Awakening our inner children, the initial activities included hopping, skipping and jumping around the hall, chasing after each other as if it was playtime at primary school. Adequately warm ??okay, we were dripping in sweat ? the first port of call was the trapeze. Although some had misgivings about taking part in the leap of faith to begin with, and rightly so, everyone eventually participated. Like pulling off a plaster, it made perfect sense for the Centre to place the trapeze at the forefront of the action. The most extreme of all the activities, we could then relax and focus on the less heart-in-mouth activities ? although the tight rope walk was more alarming than you?d expect.

Philip Nichols, head of marketing & communications for the company, said: ?We’ve been running Circus Teambuilding Days for over 15 years, and hundreds of many different organisations from huge multinationals to local businesses have taken part. We arrange workshops for anywhere from 12-150 participants.? Firms to have experienced clowning around for an afternoon include BBC, eBay, Disney, Unilever, Topman and EY ??yep, even professional services firms like to let loose apparently. Nichols continued: ?Circus is a physical activity but it’s not competitive ? it’s about working together. It’s also a very fun away day for teams looking for something a bit different. Challenging activities help to take participants out of their comfort zone, learn to appreciate one another’s strengths and improve communication and trust. We ask for feedback from all our clients and it’s always incredibly positive.” Post-trapeze, which is apparently only 9ft high, though we don?t believe that, we jumped on the tight ropes, followed by juggling and acrobatics. It was the latter which arguably called for the most trust to be developed between us and the other participants. While the other exercises are done within a group, it?s essentially you as an individual that has to complete the task at hand, although support from peers is readily available.

Experiencing a team away day with a difference

In the same way that the trapeze is first on the agenda, it makes perfect sense to place the acrobatics last. With balancing acts that require standing on each other to create majestic body-built architecture like a human pyramid, there?s a real sense of accomplishment and also bonding that comes with it.? In essence, you need to build trust and support to lift each other up, the same approach?you would use for a creating a solid team in the workplace. ?People have an experience here that they just can’t get anywhere else and achieve things that they didn’t think they could do. We often get comments from participants saying they really want to do it again. The most satisfying response is when somebody decides that they want to join one of our longer courses,? Nichols added. He?s right ? it really is a unique experience, one that should be considered as a means of bringing your team together as an alternative to heading to the local boozer. After all,?employees want to be treated like consumers???what better way to encourage that than by running away to the circus? By Zen Terrelonge By Shan? Schutte