The next time someone in Whitehall has a good idea on how to get more apprentices into training, perhaps they might like to run it past the real world, before rolling it out to be ruthlessly and inevitably exploited by big businesses.

A recent study from the think tank Reform shows that many firms, including coffee chains and high street retailers, are taking advantage of the government’s Apprenticeship Levy by using it in ways which it wasn’t designed for.

As a regular champion for the benefit of apprenticeships to the UK workforce, I was initially encouraged by the introduction of the Apprenticeship Levy and the pledge of the three million apprenticeships it hoped to create. But, now it’s clear to me that the government has made a dog’s dinner of the entire scheme.

It’s no hidden truth that the UK has a shortage of skills in trade, engineering and technology industries, but the Apprenticeship Levy has by no means solved this. In fact, it seems to be causing more harm than good.

More and more young people are choosing options other than university, but if the government is going to fruitfully invest in its future workforce, then the money needs to be used to grow skills other than flipping burgers or making a decent cuppa!

It recently emerged that many coffee chains and fast food giants have been disguising the most basic jobs as something much more glamorous.

Many youngsters looking to enter the catering sector may be enticed by the prospect of training as a ‘hospitality team member apprentice’, but in reality, they’ll be serving endless fish patties and quarter pounders day in, day out.

Meanwhile, the likes of Deloitte are using the levy to train corporate accountants. This situation is incredibly annoying for companies, like Pimlico Plumbers, which use the levy properly and give eager, fresh-faced school leavers the chance to learn valuable skills.

It’s not rocket science to figure out that these ‘hospitality team member’ and ‘customer service’ apprenticeship roles would exist, and people would be trained to do them, irrespective of whether there is government money available or not.

I don’t actually blame the companies that are doing this, they are just doing their best to exploit a business opportunity. But someone needs to take responsibility and plug the loophole.

I knew before leaving school that college and university wasn’t for me and was lucky enough to train alongside professionals in the plumbing trade. But, what baffles me is why the government is investing money in low-skilled jobs, rather than increasing the opportunities for young people to learn life-long valuable skills.

How about all the geniuses in Whitehall make an ‘endangered species’-style list of the skills that are actually in short supply in the UK, and make money available for training people in these jobs? I’m guessing that accountants and coffee baristas won’t be on that list.

And no, I don’t have a problem with accountancy companies and coffee chains paying into the levy, since I’m sure their shareholders and managing partners need plumbers, builders and engineers, and they’d be the first to complain when they can’t find good skilled tradespeople. 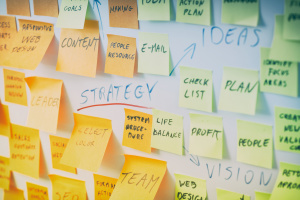 Six SME marketing misconceptions and how to avoid them