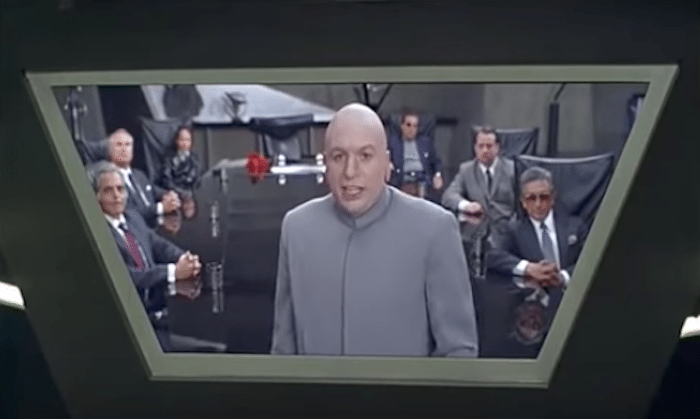 Share via
Conference calls have had such an influence on our culture that we now frequently see them in movies and TV shows. We?ve gathered five of the most notable ones from film and TV to show you how there?s nothing more dramatic than groups of people talking on the phone. (1) Dr Strangelove ? US president Merkin Muffley and the Soviet premier This classic scene from Kubrick?s comic masterpiece contains many faux pas that are all too familiar in today’s?conference calls. As the US president calls the Russian leader to tell him the States might accidentally bomb the USSR, there are distracting background noises (?Do you suppose you could turn the music down just a little??), stuffy awkwardness (?It?s great to be fine?), even the need to constantly repeat things (?The bomb, Dmitri, the hydrogen bomb?). Peter Sellers makes a scene about potential world destruction utterly hilarious. (2) Austin Powers ? Dr Evil makes his demands We?ve all been on?conference calls where someone makes a catastrophic slip of the tongue. Just like Mike Myers? megalomaniac super-villain Dr Evil, who nearly ransoms a nuclear warhead for a surprisingly small sum of money ($1m!), before adjusting it to something a little more appropriate ($100bn!). This would become a running gag throughout the series, culminating in a final demand for ?one billion gajillion favillion schabba-doodle-ooh-lemillion schamaly gomolly schleemillion yen? in the third (otherwise disappointing) film. (3) Mean Girls ? The four-way call This four-way phone conversation makes the list because of its brilliantly modern take on the he-said-she-said game of Chinese whispers that all friendship circles go through. True to the film?s depiction of female rivalry, there is plenty of duplicity and back-stabbing that goes on as the call bounces from person to person. The great script and tight editing all build up to reveal a killer punchline. (4) Star Trek: The Next Generation ? Picard calls back It?s not out of the question to consider every call made from the USS Enterprise?s deck as a conference call, is it? Just like on most conference calls, the crew witness an appearance from a person they weren?t expecting to dial in. So we get this famous scene in which Jean-Luc Picard, having been assimilated by the Borg, utters the famous phrase, ?resistance is futile?. (5) The Simpsons ? Film execs use the spider phone In the Season 21 premiere episode Homer the Whopper, studio execs gather round a spider phone to discuss turning Comic Book Guy?s superhero comic into a film franchise. It?s a pivotal moment that ultimately leads to Homer Simpson being cast in the lead role and whipped into shape by Seth Rogen?s personal trainer. You know technology has truly infiltrated popular culture when it makes an appearance on The Simpsons.

Tim Stone is vice president of marketing EMEA at Polycom