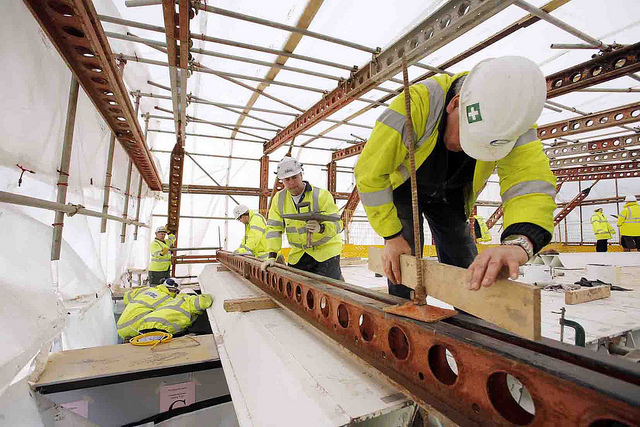 Britain’s construction sector is on the march. Markit Economics research published earlier this week found that jobs in the sector were growing at the greatest pace since the survey began in 1997 and that new work given to building firms increased by the greatest amount since January.

New stats today from accountants NoPalaver show that construction job vacancies have increased this year by 36 per cent. The research claims there is currently 18,000 construction vacancies, almost twice as many as in 2010. Graham Jenner, Director of NoPalaver Group, said: “The construction sector is benefiting from Government encouragement to increase house building which has created more opportunities for construction companies and more work for contractors.” “The commercial property market continues to recover and this is also providing a boost to the construction sector.” However Will Davies, founder and MD of the property maintenance firm aspect.co.uk said that the construction industry could suffer if there is a failure to address the shortage of skills. He said: “In the construction sector it is encouraging that certain firms can employ more people and train more youngsters in the future. But we must be aware that growth in the construction sector will falter unless we train more young tradesmen. “All of the building trades have been hit by the recession and an almost non-existent housing market for the past six or seven years. If we don’t start training youngsters immediately our economic growth will be dependent upon importing skilled labour from Eastern Europe.” Davies is a big advocate of returning to a “traditional” system of apprenticeship training.  He said: “There are still too many young unemployed in this country and they are becoming totally demoralised by the job market.  “Providing them with high quality training is the key to preparing them for a lifetime of work and the construction sector has a large part to play. If we don’t deal with the problem we will be paying for our failure for decades to come.” Related: Britain’s 30 fastest-growing construction firms Image source