Skip to content
Interviews
Share via
Britain?s shoppers are set to spend ?203 apiece on average for Black Friday. That said, Visa?s consumer spending index for October has shown UK customers were happy to part with cash way before the Christmas shopping season had begun. In what the firm expects to be a strong fourth quarter, consumer spending rose 2.5 per cent year-on-year and by 2.3 per cent on September. It marked the largest growth increase in six months, and outpaced ?muted expenditure growth? experienced over summer in the wake of the EU referendum. Although ecommerce led sales with a 4.3 per cent annual growth, face-to-face sales were also up by 1.8 per cent ? the first time that?s happened since July. Visa highlighted the hospitality and leisure industry as the sector with the strongest annual consumer spending growth with nine per cent. Other sectors that experienced high growth levels included recreation & culture and food & drink. 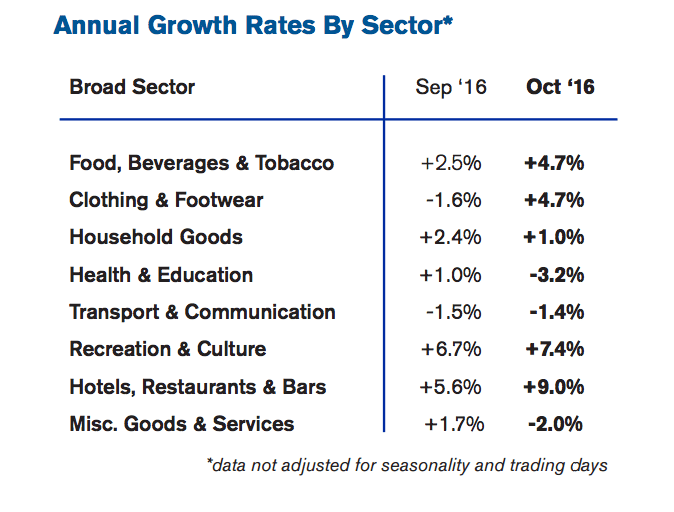 ?Consumer spending growth rose to a six month high in October. Talk of potential price rises does not appear to have dented consumers? confidence, with spending up 2.5% on the year, on a par with pre-referendum levels,? said Kevin Jenkins, UK & Ireland MD at Visa. He said that the success of hospitality and leisure, as well as food & drink, can be connected to half term and Halloween. Elsewhere, cold weather has revived clothing sales. [rb_inline_related] Jenkins continued: ?We?ve also seen two strong comebacks this month. Clothing and footwear bounced back strongly from a disappointing dip in the previous month, up 4.7% in October, and the highest level of growth since September 2015. New season stock, combined with a chilly start to winter created the perfect conditions for the high street to rebound from last month?s flat line. ?As we get closer to the all-important Christmas trading season, it will be interesting to see whether the strong momentum in October continues into Black Friday and beyond.? Image: Alton Towers