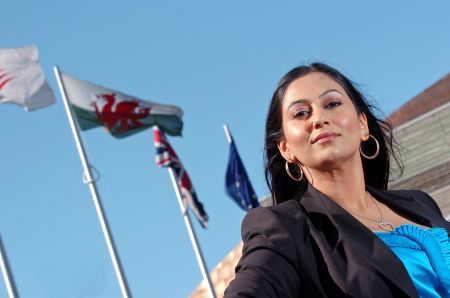 Hundreds of Asian women gathered at the London Hilton on Park Lane last night to celebrate Britain’s top Asian women. Amongst the winners was Shazia Awan, the founder and director of Peachy Pink, who was crowned Entrepreneur of the Year.

28-year-old Awan successfully launched her range of ladies underwear in Debenhams last year, and has also created a range of anti-cellulite underwear called PeachyBody, which have an inbuilt 3D wave massager in the weave, to boost circulation and help reduce cellulite.  Presenting the award, the Rt Hon Theresa May MP, home secretary and minister for women and equality, said that the winners and nominated entrepreneurs show the immense contribution that Asian women make to life in Britain: “Every one of these women is a role model, not just for women and equality, but for Britain’s economic competitiveness and prosperity.” Awan, who was the also the Conservative parliamentary candidate for Leigh, was also commended for setting up her own charity. The judges also gave a special mention to Geeta Sidhu-Robb, the founder of Nosh Detox. Following a career as a lawyer, politician and public speaker, Sidhu-Robb set up two companies: healthy food delivery firm Nosh Detox in 2006; and Broadband Africa in 2007, promoting the wider availability of high-speed internet and public services across Africa.  “As we navigate our way out of recession, we need to utilise the talent and potential of women like this,” added Theresa May. “Now more than ever, we need more women and more Asian women leaders and entrepreneurs. Creating an environment where we can develop that talent and tap that potential is at the heart of the coalition government’s priority for women.”