It won’t have escaped your notice that the world has moved on, both seismically and rapidly. Meanwhile, management theory has been playing stuck in the mud.

For example, we’ve gone to great expense to recruit people who have the right skills and knowledge. We then spend the next ten years identifying their weaknesses and fixing them. Because, of course, ironing out the wrinkles is the best way to maximise their potential.

In the interests of shaking things up, we don’t believe you can get much further from the truth.
In Leadership: The Multiplier Effect, our starting point is that we’re not human beings that are flawed, or problems waiting to be solved. We are potential waiting to unfold. Thrusting your best self forward is like putting yeast into the organisational dough.

If we, and those around us, wish to become truly outstanding then the only thing more important than blood, sweat and tears is to play to our strengths.

Let’s take a couple of famous examples from the world of track and field. First up, Olympic quadruple gold medallist, Mo Farah. Apparently he’s really bad at the shot put. Like legendarily appalling. Farah can hardly even lift the thing. If you judge him on shot put, he is a failure.

Consider the case of Daley Thompson, the first decathlete to hold the European, Olympic and World titles simultaneously. That meant performing well in ten track and field disciplines over two days. He was awesome at nine of them but rubbish at the tenth: the 1,500 metres.

Imagine if his coach had used the olde worlde method of ploughing development time into his weaknesses? His personal development plan would have focussed on that tenth discipline and guess what? He would have started losing ground in the other nine and we wouldn’t be writing about him now.

Luckily for Thompson and Great Britain, he knew the secret of being awesome was playing to his strengths, so he focussed on being superb in the first nine events and his strategy for the 1,500 metres was simply to finish without tripping over. In Farah’s case, he steered well clear of the shot put.

The result? Legends were born. So, we’d recommend you bin the development plans that highlight and focus on weakness and start focussing on peoples strengths.

Most organisations do it, already, in part. They recruit someone with the strengths they need for the role, but when review time kicks in the focus is on weaknesses and how to bolster them up rather than how to make those strengths even stronger.

If an employee’s weaknesses are stopping them working safely or massively hindering their competence, you absolutely need to sort them out. But, we promise that if you switch your focus to strengths-based development, employee engagement and productivity will rocket.

It doesn’t stop there. Once you bin the outdated notion of eradicating weakness and start to focus on strengths, work/life becomes awesome for your people. Employees who get to play to their strengths will get more enjoyment from their job, have more energy, have high levels of engagement and will be more likely to give you the 15-20% discretionary effort they have available.

But, what about the increase in profit you lured us in with at the start? Well, here you go.

The research from Positive Psychology suggests the more you focus on somebody’s strengths, the more likely it is they will have a positive experience and an emotional attachment to their work. Meaning, they will work header and be more engaged – up to 73% more engaged.

Ultimately, your organisation’s competitive advantage lies in getting employees to go above their job description. Superhero status means changing your focus. Finding and playing to your employees’ strengths is the quickest way to unleash your inner Daley Thompsons.

LEADERSHIP – THE MULTIPLIER EFFECT co-authored by Dr Andy Cope, Jonathan Peach and Mike Martin is out 2 August 2018, published by John Murray Learning and available on Amazon £12.99. 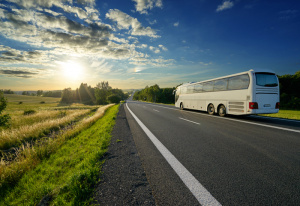 Is it time to lease your bus and coach fleets?