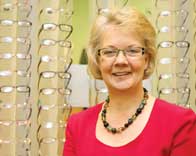 Dame Mary Perkins, Queen of the Opticians, is speaking to Real Business from Australia, where she is currently opening up new branches of Specsavers. She already has 1,503 stores worldwide, employs 126,000 people and turns over an annual £1.36bn. Yet she has a vision to make Specsavers even bigger: “It’s a long, slow haul. But until everybody has visited one of our stores, I’m not going to be satisfied,” she says.

Dame Mary, 66, is a remarkable success story. She trained as an optician, then took over her father’s practice, consisting of one room above a bakery in Bristol. Along with her husband Doug, she built the business into a small chain of 23 shops and sold it for £2m. The pair then moved to Guernsey (to be near her retired parents rather than to evade tax) where, on a table-tennis table in her spare bedroom, she developed the idea for another optometrics business. This one would be different: she would operate joint ventures with the opticians who would be based in their own shops and own half the business. Dame Mary also wanted to take advantage of market deregulation, which allowed the optometry profession to advertise products and services for the first time, just like other retailers. This
was to be a volume business, bringing prices down and making spectacles affordable to everyone. “I was in a lucky position because I knew the industry inside out and I had an absolute passion for it,” she says. Dame Mary tells us that opening the first Specsavers store in Bristol in 1984 was her biggest milestone. The second, she says, was taking the business overseas, to the Netherlands in 1997. It was there that she also made her biggest mistake: employing consultants. “They told us the Specsavers brand wouldn’t work in the Netherlands and advised us to change the name. They came up with Optiprima. I never should have listened to them,” she says. “We used Optiprima for three months, realised how stupid it was and then changed the name back to Specsavers. In the grand scheme of things, it didn’t bring the company down and there was no rollout, thank goodness. But it was a waste of money. And no, I haven’t used consultants since.” She does, however, turn to her offspring for advice. All of the couple’s children have gone into the business. Son John is joint managing director, along with Doug; daughter Cathryn is head of internal; audit and the youngest, Julie, manages Specsavers’ operations in the Netherlands. Julie says she still remembers coming home from school and being shown the first Specsavers logo. “I grew up in a household that was always working, and that rubbed off on me,” she says. “I had a Saturday job from the age of 14, and my friends and I would help pick frames in the Specsavers warehouse – for very little money, I might add.” Julie joined the family business in 1992, after completing a degree in business studies and international marketing. She worked across different departments in the UK and, in 1997, moved to the Netherlands to help Dame Mary open the first international store. Julie says the process taught them both some important lessons: “You can’t just plonk your business model in a new market and assume it will work,” says Julie. “You have to understand culture and consumer habits. For example, the Dutch don’t have credit cards. It took me 24 hours to get a mortgage for my house in the Netherlands – but it took me a year to get a credit card for the business. The Dutch only spend what they earn, they’re very conservative. So where Brits tend to replace their spectacles once a year, the Dutch do it every five years. And the optometrics market isn’t regulated there. A taxi driver could test your eyes.”