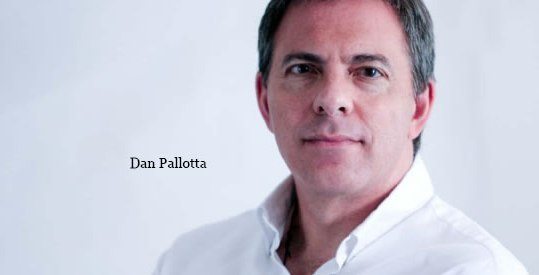 Dan Pallotta, the American social entrepreneur, has written an interesting piece in the Harvard Business Review this week (see below).

Dan Pallotta is the founder of Palotta Teamworks, a fantastic social enterprise that organises bike and foot events for fundraisers. Thus far, Dan Pallotta’s company has raised over $300m for charity, and employs over 400 people. He knows how tough it can be to run your own business, but he also knows that feeling of ecstasy you get from success. Dan Pallotta’s piece in the HBR talks about what makes an entrepreneur, what makes you stand out of the crowd? His answer? Vulnerability. It’s a good read. We’ve re-published it below – let us know what you think. And don’t forget to check Dan Pallotta’s regular blog in the Harvard Business Review. (And thanks to Ray Dey from Enternships for bringing the article to my attention, through Twitter. Follow him –@rajdey – for some interesting links.)

By Dan Pallotta Imagine Walt Disney at the age of nineteen. His uncle asks him what he plans to do with his life, and he pulls out a drawing of a mouse and says, “I think this has a lot of potential.” Or Springsteen. In a concert he once told the story of how he and his dad used to go at it — how his father hated his guitar. Late one night, Springsteen came home to find his father waiting up for him in the kitchen. His father asked him what he thought he was doing with himself. “And the worst part about it,” Springsteen says, “was I never knew how to explain it to him.” How does he tell his father, “I’m going to be Bruce Springsteen?” Someone interviewed me a few months back for an entrepreneurship project, and he mentioned that in his conversations the thing that stood out most was the willingness of great entrepreneurs to be vulnerable. It’s not the first association you’d make with an entrepreneur. Words like “driven,” “ambitious,” and “persistent” usually come to mind. But the moment he said it I knew he’d hit the nail on the head. Vulnerability. It is the most poignant quality in every entrepreneur I know. There’s a misfit in each of us, and it’s the most delicate, precious thing that we have. Sadly, most people make it their life’s mission to hide it, to cover it over in the same clothes, the same work, the same “regurgitations,” as Thomas Merton wrote, as everyone else. This virus of homogenization has infected the landscape. Our backdrop in real life now mimics the scenery repetition you’d see in a Fred Flintstone cartoon as he drove down the street. But now it’s Home Depot-Walmart-McDonalds-Starbucks; Home Depot-Walmart-McDonalds-Starbucks; Home Depot-Walmart-McDonalds-Starbucks. Ironic that all those enterprises were begun by entrepreneurs trying to do something different. And poignant that in the absence of Walt Disney himself, the Walt Disney Company just keeps building more Disneylands. I used to visit the merry-go-round in Griffith Park in Los Angeles where Disney once took his daughters, asking himself, “Is this all there is? There has to be a better place to take my children.” And the rest is history. The great entrepreneur — the entrepreneur who really changes things — is the one who, in 2010, goes to Disneyland and asks the same question: “Is this all there is?” And the new world she or he will create as a result of that audacious inquiry is one that cannot possibly be conceived by people busy trying to fit into the world as it is. To question the hegemony of merry-go-rounds — to actually care that there should be something more magnificent than a merry-go-round — is to be a misfit. I mean, who worries about these things? It reminds me of that scene in Annie Hall where the mother of a young Woody Allen takes him to a shrink and he says to the therapist, “How can I relax when the universe is expanding?” And his mother says, “You live in Brooklyn! Brooklyn isn’t expanding!” Talk about a misfit, right? To embrace the misfit in oneself is to be vulnerable. It is to forsake the easy acceptance that comes with fitting in and to instead be fortified by a kind of love, really. A love of life, a love of wonder, and, ultimately, a sustaining love for oneself. Far from egoism, that love for oneself is a measure of one’s love for others, for humanity. And it is only from love that great ideas can be born. This kind of love cannot be taught in business school. It has to be felt. It has to be given sanctuary away from the noise and relentless assault of information. And then it has to be nurtured. It must be embraced, in the light of day, for all to see, for people to ridicule, to criticize, to laugh at. And the entrepreneur has to be willing to feel the pain of that ridicule and suffer the risk of the dream being stolen, or crushed by the meanness of this world. But the misfit doesn’t worry about that. The misfit has a higher calling: to bring the unmanifest into being, no matter who is saying what. Vulnerability is the absence of cynicism. And the absence of cynicism is love. As that interviewer uttered the word “vulnerability,” I thought of some of my entrepreneur friends: Peter Diamandis who founded X Prize,Wayne Elsley who founded Souls4Soles, Billy Shore who created Share Our Strength, Brian Menzies who founded 1-800-CharityCars, Dennis Whittle who created Global Giving, Torie Osborn, who brought the L.A. Gay & Lesbian Center into the twenty-first century. And I realized that what separates them from others is their abject lack of cynicism. Their willingness to be vulnerable. Their love. We’re keen to hear your views on Dan Pallotta’s piece. Leave your views and opinions below.