Skip to content
Interviews
Share via
I hadn’t even had time to press record on my phone before Flight Club co-founder Steve Moore had me over to the reception desk, pointing animatedly at the screen. “Look at it, it’s mental!” Moore was gesturing at the booking screen, a timetable dominated by bookings showing how popular the relatively young business has become. For 2pm on a Thursday I was surprised with how full the Flight Club Shoreditch site was. All around us groups cheered and whooped, caught up in the excitement of a game that has been around in its current form since the 19th century but been given a technology makeover by Moore and his team. In two and a half years Flight Club has gone from a risky idea to a business with two booming London sites and a new Chicago location on the way. Some 170 staff work the floor and behind the scenes to power an operation which has big ambitions. So impressive is it’s growth that the business scooped Growing Business of the Year: Smaller Company (Turnover up to £10m) at the Amazon Growing Business Awards 2017 – hosted by Real Business since 1999. Over 200 focus groups during the company’s early days indicated darts, in its analogue form, just wasn’t quick enough. Walk into a Flight Club location and you won’t see many battling it out to land a double one and win a leg. Instead, they’ll be engaging with one of a number of original games that are only possible because of the big investment that went into technology. In our walk around Flight Club Shoreditch, which can house 400 customers, Moore pointed out cameras have been developed internally and are similar to the Hawkeye technology made famous by line tennis call disputes in cricket dismissals. He talked in depth about the number of calculations made every second as thousands upon thousands of darts thunder into the 12 boards on show. Flight Club in numbers: “We have a similar customer demographic to Swingers and Bounce,” Moore said of his competition in the mini golf and ping-pong spaces. “The difference is the technology, which comes in two parts. Firstly, our game flow is unparalleled. Secondly, we have our tournament offering. To have 140-odd people entertained in that way, you can’t do that in any other activity.”

With a little help from my friends…

The support for Flight Club in the early days came from the 39 friends and family who committed money, alongside a little bank debt, to create a £2.5m growth capital pool. Moore and his co-founders then pulled in every favour they could to launch the ambitious project in a space no one could have had experience in. “We didn’t have marketing when it opened, it was all done through word of mouth – but we were fully from day one with 1,000 people a day in the first few weeks,” he remembered. “That is the beauty of London. If you are good they will come. Now we’re completely oversubscribed at a rate of 400 per cent a day.” While Moore and his senior team don’t seem have any problems getting punters in the door, finding new doors for them to come through is definitely a challenge. Not realising how taxing property development and acquisition is, Moore has now established an in-house team to streamline this process. “The legals, leases, building permits, design process – it’s all bonkers,” he said. While on the hunt for new locations in London and the rest of England, Flight Club’s next location will be opening on the other side of the pond, in Chicago. “It’s such an excitable product, and I just want more people playing it,” Moore said of his decision to go international. Rather than trying to do it all by themselves, the team have embraced a hybrid model somewhere in between a franchise and a joint venture – licensing the brand and IP and letting another party worry about finding a property and getting the appropriate licences. “The feeling was that Chicago would be more receptive. New York can be a tricky place to launch a new concept, but we’re looking there too,” he added. 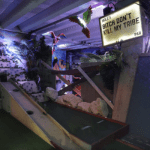 The Junkyard Golf journey from pop-up to 12,000 sq ft leases In two short years Junkyard Golf has gone from a booze-induced experiment to a business forecasting revenues of £12m next year – quite a ride for a company which has its origins in reusing rubbish.

It takes a year, working quickly, for Flight Club to open a new site. From the onerous process of securing a lease, through the three-month design phase to make each location unique, to staffing and eventually opening, it’s a complicated process. The executive team powering this roll out has experience derived from positions at Sony, the BBC, Bupa and Credit Suisse – with Flight Club’s technical director someone who has worked with NASA. In recruiting Julia Diggs to serve as people operations director, Moore is looking to improve on an already enviable employee and culture position. “Our retention in central management is 100 per cent after two and a half years. With bar staff, we haven’t had anyone leave for a reason other than going back to university or travelling. They all fundamentally really enjoy working fo us. Now we want to set up a training academy for the new staff, as they are such an integral part of what we do.” Looking back at Flight Club’s win at the Amazon Growing Business Awards in November, Moore sees this kind of recognition as another great way of celebrating the achievements of employees and retaining them for the future. He was pleased to be acknowledged as much as a technology business, and one leading on the innovation front, as a hospitality outfit. “We’ve effectively set up a creative agency within Flight Club and have a great pool of talent to create that live experience,” he commented. My Flight Club experience and discussion with Moore ended with another dose of excitement huddled around a screen, this time a smartphone. “Look at that design, it’s mental,” he said again, this time referring to the bar at the company’s Bloomsbury site. He also touched on a new technological development, set to drop in the next month or so, which he believes will further revolutionise the space Flight Club operates in and catapult it to further success. While it was slightly odd to see so many people enthusiastically cheering on friends and colleagues just after lunch on a Thursday, it’s clear evidence Flight Club has created a recipe for success.

Check out some other Amazon Growing Business Awards winners