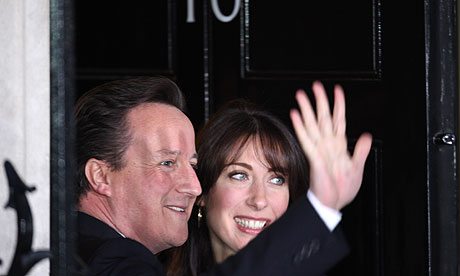 Earlier tonight, Gordon Brown went to Buckingham Palace to tender his resignation to the Queen. After being invited by the Queen to form a new government, David Cameron told Britain that he aims to form a “proper and full coalition” with the Lib Dems, to provide a “strong, stable government”.

Aged 43, David Cameron is Britain’s youngest prime minister for nearly 200 years. Although the Conservatives won the most seats in last week’s general election, it failed to secure an overall majority. But what does it mean for Britain’s entrepreneurs? The new government’s policies are still unclear, as it remains to be seen what the result of the negotiations with the Lib Dems will be.  We’ll be dissecting what the implications of the coalition government are for British business tomorrow at our Entrepreneurs’ Summit. You’ll be able to follow a live blog of the Summit right here on Real Business, so don’t forget to check back tomorrow morning. In the mean time, we’re eager to hear your views. Are you excited about the new coalition government lead by David Cameron? Do you believe that Britain’s entrepreneurs will benefit?