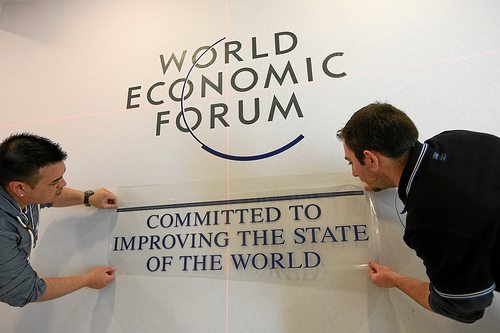 Davos ended at the weekend with a warning from Christine Lagarde. “Do not relax,” she announced. The economy is not out of the doldrums yet.

World leaders and all-star CEOs went back to their countries and companies, boosted from a five day stretch of deliberations and insight, ready to keep fighting. For a certain group of entrepreneurs that travelled to the forum in Switzerland, however, relaxing is never an option. They are rarely “out of the woods”.

This year was no different, and 29 entrepreneurs travelled to the forum with the Schwab Foundation. Their efforts, this time, were supported by The Huffington Post, which added an extra buzz around their cause and gave them an added platform to speak from.

As well as the annual meeting, the Schwab Foundation hosted a welcome dinner for the entrepreneurs and representatives from Boston Consulting Group, CitiGroup, Deutsche Welle, GDF Suez, HP, Jubilant Bhartia, UBS and Vimplecom.

Ariana Huffington spoke at the event, stressing the importance of social enterprises in creating the future “we all want to see.”

Can these entrepreneurs have a significant impact when the world’s leaders and stakeholders are so distracted by the economic problems of the western world?

Luckily, some reports coming from these entrepreneurs have been positive.

Thorkil Sonne, founder and chairman of Specialist People Foundation, works hard to help those with autism to find work. He believes there is a wealth of untapped human capital, which may not fit into the standard model of employment but can add massive value if we work to unlock it.

“It has been a great experience – and a super-motivating thought – that if I connect with the right people in Davos this week I can make a giant step towards my goal of enabling one million jobs for people with autism and similar challenges,” Sonne wrote in a blog post.

“I have experienced openness among large corporations, serious challenges in communities and brilliant business models, global networks and technology solutions which, in the right combination, can solve many of the most pressing global challenges.”

Let’s hope his optimism isn’t without warrant. Other voices have been less positive about the social entrepreneur buzz at Davos.

“While it would be convenient and gratifying if maximising profit and minimising social suffering worked well together, evidence suggests that in many instances, the combination is a volatile one,” wrote Erica Dhawan, a global shaper at the World Economic Forum in Forbes.

“Social entrepreneurship is just a buzz word, and it never succeeds without a deep understanding of the local environment, corporate governance, and long-term infrastructure.”

The World Economic Forum is a playground for debate. It attracts some of the most powerful people on the globe and prompts critical conversations. Let’s hope that these elements will prove helpful for the social entrepreneurs who attended, and that they can gain some of the resources they need to grow their ventures. It certainly isn’t time to relax yet.