“We want a bank we can work with,” explains Dawnus’s group finance director, Tim Lowe. “Lloyds Bank fits the bill and we’ve worked with them since 2005. All of our banking is through Lloyds Bank and it’s been a positive experience working with like-minded people.”

Since then, Dawnus has seen its turnover grow from £78m to £177m. The business has also been named South Wales Evening Post Business of the Year and has appeared in the Sunday Times Profit Track 100.

“Dawnus has really been on a terrific journey,” says relationship director at Lloyds Bank Commercial Banking, Mark Robinson. “We’ve been with them along the way and have provided the lending facilities they’ve needed to secure that growth.”

Admittedly, it’s not always been an easy journey. The contract by contract nature of the construction and civil engineering sector can throw up difficulties from a funding perspective. Throw into the mix a recession and it’s when relationships really begin to tell.

“The strength of the relationship is vital,” agrees Robinson. “We’ve always rated the management team very highly and we like the way they approach contracts and customers.”

From late 2009, Dawnus began to investigate the possibility of undertaking construction work overseas.

“We now have 48 per cent of our work overseas,” says Lowe. “It’s secured our UK jobs but also means we employ 250-300 ex-pats and 1,000 indigenous staff in Sierra Leone. There was a lot of potential risk for the bank to come to terms with, but we share a level of trust, which has meant they’ve been happy to support us by providing facilities that track our growth.”

The combination of the overseas work mirrored by impressive growth in the UK has enabled Dawnus to increase turnover by £100m and to ride out the worst of the UK economic downturn.

“We want a bank we can work with. Lloyds Bank fits the bill,” said Lowe.

As Robinson explains, however, there was never a guarantee of success: “There was obviously substantial risk involved in working overseas, not least in Sierra Leone, which had a history of volatility, so this was essentially a business operating in a tough sector, considering a tough overseas assignment, but Dawnus’s inherent capability and caution and the fact that we have invested so much in a consistent relationship with the management team, was the key.”

So what about the future?

“We hope to continue our growth,” says Lowe. “There are lots of opportunities and we have the confidence, experience and, crucially, the support of our banking partner, which will enable us to explore these.

“There are lots of opportunities and we have the confidence, experience and, crucially, the support of our banking partner, which will enable us to explore these.”

How a creative businesses can better sell its ideas 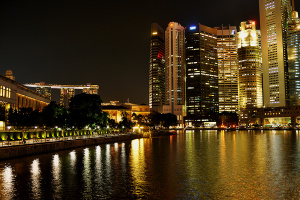