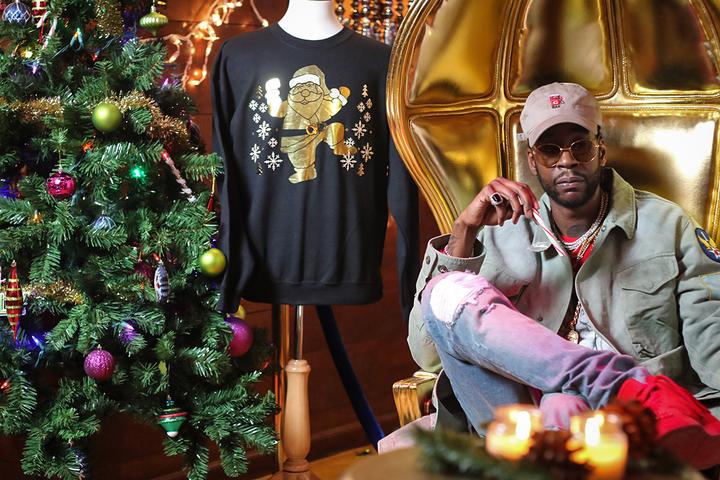 Share via
Christmas Jumper Day (16 December) may have passed and we at Real Business made the most of it but Christmas is yet to come, so 2 Chainz (real name Tauheed Epps) is hopeful he ll make it onto Father Christmas” Nice List. The generous Georgia-born artist and dad of three has listed a $90,000 seasonal jumper, billed the ?world’s most expensivest ugly Christmas sweater” on his merchandise store 2ChainzShop.com for $90,000 to raise money for charity. Ugly is quite harsh and we ve definitely seen worse aside from being obviously garish thanks to 50 carats of diamonds and 250 grams of gold, the jumper is positively jolly. It was designed by 2 Chainz himself, while his personal jeweller Avianne hand crafted the sweater, which comes in large. According to the product description: “This is extremely rare and only 1 sweater was made. Proceeds of this sweater will go to charity. It’s unclear which charity the money will go to, however. Seemingly the sale hasn’t been without its problems. An MTV article suggested the jumper had been snapped up, but 2 Chainz took to Instagram to offer clarity as he said: “The most expensivest sweater is back on sale. Let’s just say… there was complications with the order! Checkin credit scores lol!? [rb_inline_related] Ferrari also embarked on a mission to embrace the season of good will this month, as it sold an exclusive LaFerrari from its private collection for $7m. The Italian car firm promised all of the money raised during the charity auction would to go to the National Italian American Foundation’s Earthquake Relief Fund to support the redevelopment of Central Italy following the natural disaster that took place in the summer. 2 Chainz has an entire holiday collection of goods available on his website, and with Christmas in touching distance, prices of assorted caps, jumpers and other goods have been sliced by 50 per cent and above.