On the back of Easter, considered a time for new beginnings, CV-Library has looked at UK workers’ top reasons for quitting jobs and moving on.

However, doing so isn’t straightforward, according to results. Indeed, 66.7 per cent of UK workers said they find resigning “difficult” and 42 per cent feel “nervous” about the prospect of handing in their notice.

The survey of 1,000 Brits revealed 66.7 per cent have left a position in the past, and the top reasons for quitting jobs are:

(4) I was no longer satisfied with the job or working environment – 5.8 per cent

The fact disliking a boss was among top reasons for quitting jobs should be a concern. Interestingly, a separate study from Robert Half UK found 39 per cent of employees believes they’re not well managed, which shows there is an ongoing trend.

Back to CV-Library’s findings, 85.9 per cent of people have never been told the process to follow for leaving.

As such, methods of quitting jobs include doing it face-to-face for 49.6 per cent, via letter for 30 per cent, over the phone for eight per cent and via email for seven per cent – the latter of which rose to 22.5 per cent for millennials.

Lee Biggins, founder and MD of CV-Library, comments: “Quitting a job can be uncomfortable for employees, even if they’re leaving on good terms. It’s clear that many UK professionals have not received the right guidance or education when it comes to this very important part of working life.

“That said, it’s positive to learn that despite being nervous, the majority of workers would arrange to meet their boss in person to discuss their departure. However, it appears that some would still prefer to take an easier route out, quitting over the phone or via email.”

While we’ve had top reasons for quitting jobs, the top methods of resignation can be found on the next page. 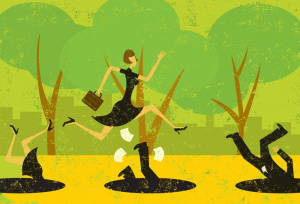