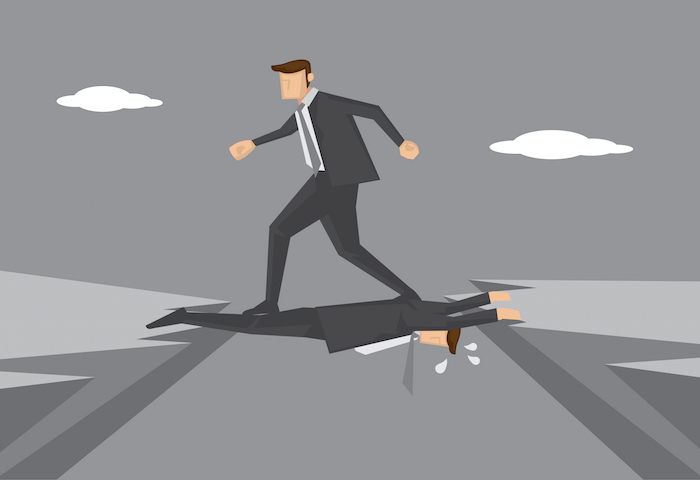 Share via
People are tired of traditional business agendas, including game-playing, office politics, sexism and discrimination ? why can?t we just get on with doing a good job and being a success? The problem is that where these attributes are present in a culture, people hate it but their inherent self-protectionism prevents them from breaking the traditional business mould. ?If I stand out it could impact my team/job/promotion prospects.? You could also be fearful for others and prefer to keep the peace. Change is often unsettling and it can be easier to keep the peace and let things go. This is understandable but it?s time for all that to change. The traditional business game of office politics doesn?t work well on a number of levels: If it?s all so bad then, why does it continue to be so prevalent in the traditional business world? When it comes to stamping out office politics, progression towards a healthy, successful culture can be slow and painful. If someone has discriminatory beliefs, you cannot change them. You can only change what is acceptable behaviour publicly displayed. This is worthwhile doing but if someone is sexist or racist they will still find ways to discriminate, just get better at justifying why the other person was right for the role. Don?t be put off, it is possible, as many of the organisations we?ve worked with have found, it takes planning and implementation at both a strategic and individual level to achieve. There are many ways to do this and here are some examples of how businesses we?ve known have achieved it: Build questions and scenarios into the recruitment process that test for these types of behaviour. Particularly in assessment days with group work watching for so called ?banter?, inappropriate remarks or evidence of bulldozing type behaviour. Leadership teams have regular coaching where they can work through these issues confidentially and find the best ways of role modeling best practice and dealing with these types of behaviour. Avoid shaming people who exhibit discriminatory behaviour at first, when people are shamed they hide and justify their behaviour. They probably learnt it in childhood, at school or to survive their environment. At first see it as a development or learning issue rather than formally disciplining people too early. Make sure there is a filter for this type of behaviour when it comes to promotions. As soon as you promote anyone who exhibits these office politics behaviours you are sending out a message that it is OK to act this way. Regardless of their other talents, only people who act appropriately should be rewarded. This is one of the most powerful ways to shift the culture. Train and develop your management and leaders to be able to deal confidently with this type of behaviour. This is more than just a one-day training course. This behaviour is psychologically complex and it?s designed to intimidate others so it?s really tough for most people, nearly 85 per cent of leaders in the study we did for Real Leaders for the Real World cited this type of behaviour as difficult. Passive aggressive behaviour is particularly hard to spot and deal with. It doesn?t need to be a massively expensive L&D initiative either, get strategic and build it into your existing training and development, or offer lunch sessions on handling specific situations. It?s not easy but it is worth it. Businesses are often successful despite all the behaviour that goes into delivering any outcome. Just imagine the time, energy and effort you could save if people were motivated and genuinely working towards achieving their goals at work ? it?s quite considerable. Karen Meager and John McLachlan are the co-founders of Monkey Puzzle Training and co-authors of Real Leaders for the Real World; The Essential Traits of Successful and Authentic Leaders. Image: Shutterstock