We’ve all been there. After a nightmare day at Ikea – let’s face it, it’s always longer than the promised “it’ll only take a couple of hours, honey” – you finally gather the energy and patience to try and assemble “Billy”.

If you don’t know who Billy is, then you’re in luck. This iconic Ikea bookcase (pictured above, left) has been torturing millions of amateur DIY enthusiasts for over 30 years now.

Well, maybe not torturing millions, but certainly many. It could just be me who’s cack-handed, but Billy has certainly given me many headaches since moving to Britain, and it always ends with me symbolically throwing my (Ikea-supplied) tools down.

But at last, we’ve been reassured that it’s not just because we’ve all read the instructions wrongly, we were actually born with two left feet (or hands, rather).

Although April Fool’s Day is just around the corner, this isn’t a silly prank. Researchers have concluded that two out of three Britons lack the necessary spatial awareness to complete DIY tasks.

In fact, so much so that Halifax Home Insurance estimates that in 2009 alone, people who lack genetically pre-determined Do-It-Yourself skills caused £400m worth of damage (and bruised fingers). Ouch!

“Some people simply do not have the mental equipment necessary to manipulate shapes and will always struggle to complete DIY tasks successfully,” reported psychologist Dr Glenn Wilson, of Gresham College, London, who led the 2,000-person experiment.

“Although there is not one specific DIY gene, spatial awareness is vital in understanding how shapes fit together and is therefore fundamental to DIY skills.”

See: it’s not our fault, it’s in our genes! And if you think we’ll eventually learn how to break Billy’s back, nope, that won’t happen either. Wilson confirmed that this innate understanding of shapes and mechanics isn’t subject to “trial and error” learning.

Better stay away from the toolbox this bank-holiday weekend then… 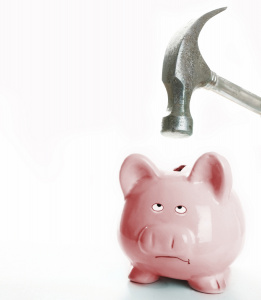