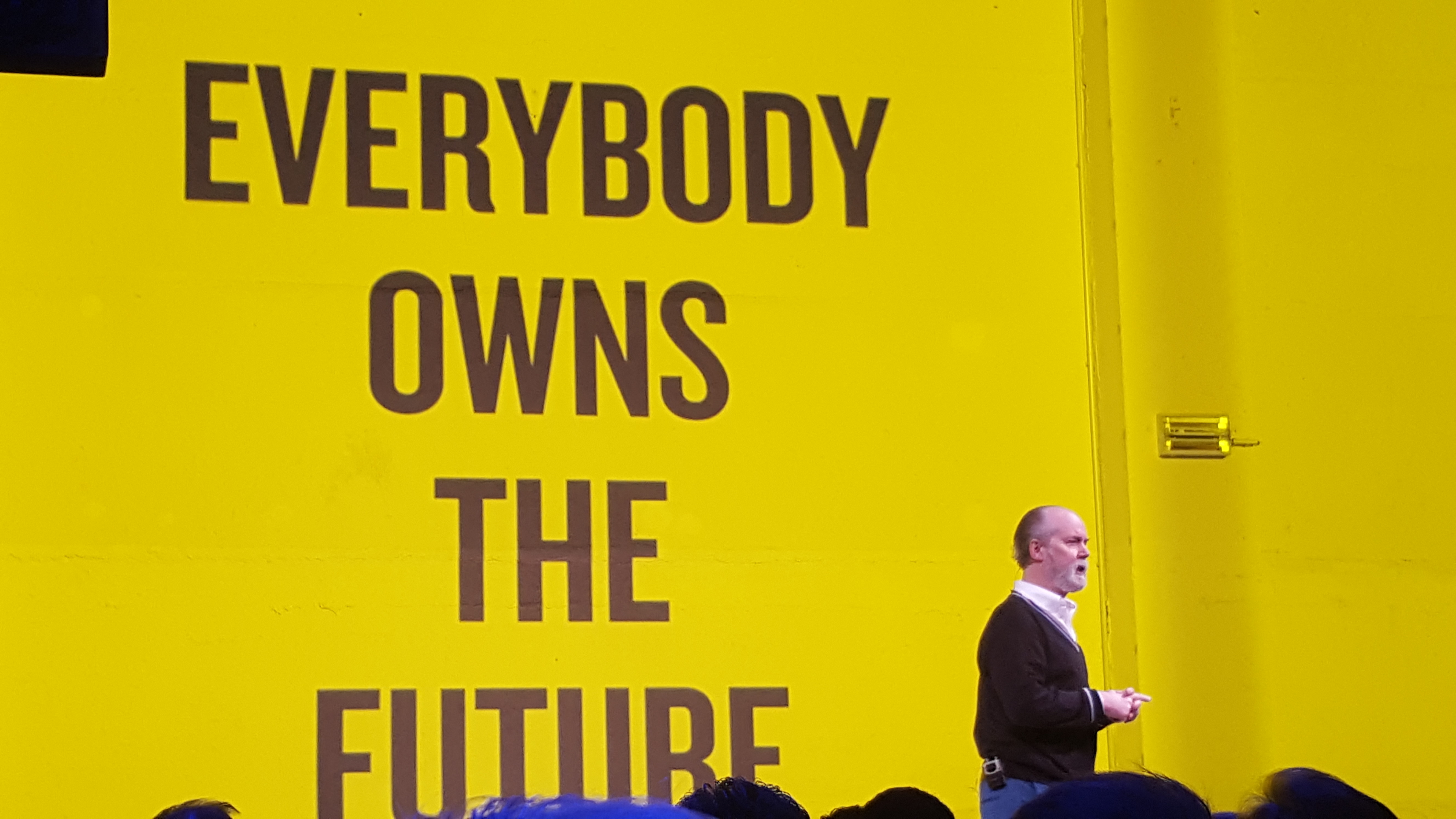 Share via
We’re in the midst of a tech revolution, and the companies flexible enough to adapt are thriving. But we shouldn’t kid ourselves into thinking the future has yet to come, Douglas Coupland told the audience in a TED-style presentation. It’s here now. Things are changing – unpredicatbly so – and sometimes without our knowledge. Known as “the man who sees the future,” Douglas Coupland told the audience how he found himself reading short stories instead of lengthy books. This is because the way we measure time has been distorted thanks to technology. In the past, our perception of time was based on what we did during the day. That’s no longer the case, he explained: “I’ve been experiencing this temporal sensation that I just can’t shake. Here’s why: Until recently, the future was something that lay ahead of us. It was something we anticipated and even dreaded. Somewhere down the line the present melted into the future. We’re now living inside the future 24/7. It’s what I call the superfuture.” This time displacement has occured because we no longer need to remember directions or algorithms to process data. Data has become the supreme ruler of time, making us measure the day through images, spreadsheets and mp3’s – and it’s made “real time” a scary place to live in. Imagine the chaos that would unravel if technology were to crash. “How I miss my pre-internet brain!” he said. “Do you remember walking down the street or taking time to read some books? We’re now constantly attached to some screen. I felt like I lost a part of myself and it freaked me out. Because we’ve never been smarter, yet we’ve never felt stupider. It’s a fact. “But I now recall a friend who told me one in ten Icelanders wrote novels – there’s a point to this. The dark side to her tale was that each book garnered on average nine readers. There’s too much content and not enough people to do the reading. It made me realise my life no longer felt like a story – there was no moral spin, no true adventure, no beginning, middle or end. I was stripped of all narrative. I origionally felt that way because my head had yet to keep up with the fact we were living in a truly digital era.” He was reminded, in a way, that tackling life and business today with a 20th century brain won’t get you far. The future is digital, nothing can stop that fact, so we all need to start embracing it. But what exactly are some of the trends businesses should be looking to adapt to? Douglas Copeland suggested the 9 to 5 working culture was “barbaric”. Jobs will soon be dispersed and the day will become more fluid. And while working hours will decrease, every day of the week will become a Wednesday – no, it’s not a randomn day he picked out from a hat. There will be no weekend to look forward to, we won’t have those Monday blues or that Friday feeling – we’ll be stuck in a Wednesday loop like a future rendition of Groundhog Day. “In reality more people will have fewer things to do, and maybe that’s a good thing as we try to cram as much work as possible down our throats,” Douglas Coupland said. ”On the other hand, too much free time is a disaster. It’s why we need to rearrange tasks so doing less feels like doing more. This is something we especially need to tackle if eternal life is on the horizon – yes, you heard right. “Let’s not forgot robots, automation and the gradual loss of obsolete jobs. We all think with some sense of magic that new job categories will emerge. No, stop thinking that way and prepare yourselves for the future. The middle class will be gone and the winners in the corporate pool will be people with actual skills. So have a skill as a backup. Furthermore, lack of wifi will be the new poverty and your new office will be, well, you.” He ended his talk with a quote from Bob Hope. Essentially, a reporter asked where Hope wanted to be buried. To this, he said “you know what, surprise me.” That’s how Douglas Coupland feels about the future. But while there’s still so much we don’t know, it doesn’t hurt to get your mindset tweaked for the inevitable digital future. By Shané Schutte