Bamping, a former cameraman, signed up for the television show 12 months after he’d launched his plastic-toy firm. “I’d convinced four members of my family to chip in £3k each. I didn’t need more money – but I did need exposure.”

He pitched his Bedlam Cube to the Dragons, who were suitably impressed. “Rachel Elnaugh and Theo Paphitis both offered me £50k in return for a 15 per cent stake. I turned them down after the broadcast.”

That short stint on national TV had the desired effect. The day before the show, Bamping had sold a measly 23 Bedlam Cubes online. On the evening the programme was aired, he sold 4,500 Cubes.

“Two weeks later we had to close the website because we’d run out of stock.”

Turnover today is £1m, and the Bedlam toys are sold throughout the likes of Hamleys, WHSmith, Tesco, Argos and John Lewis.

Bamping is now in the process of bringing the manufacturing back from China to the UK. “I wanted to be the odd one out, to have the only plastic toy made in Britain,” he explains.

“It’s much more expensive to manufacture the products here – it costs less than £1 to make the Bedlam Cube in China compared to almost £3 in the UK – but I have no quality control issues, no transport costs and much shorter lead times.”

“Every other plastic toy says ‘Made in China’,” said Bamping. “We’ve dared to be different.” 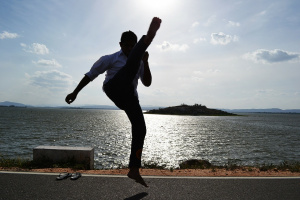