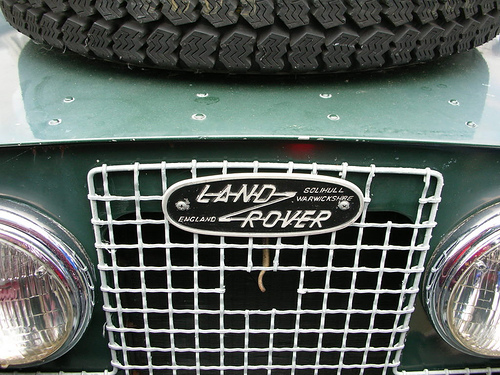 This isn’t meant as any slight on Branson because I know him to be one of the most successful British entrepreneurs in history.?It’s just that for me, the most British of brands has to be Land Rover! What icon, other than perhaps the Queen, can you think of which so denotes the British identity?

Go anywhere in the world and you will see Land Rovers performing daily tasks, often in inhospitable terrain. Africa just wouldn’t be the same without the ubiquitous Landy! Some say the same of the Cotswolds where I live but that’s another story! As a work vehicle The Defenders unique ground clearance and amazing road holding ability puts it miles ahead of the competition in my opinion, especially when it’s off road, it is also a capable performer on it, due to its turbo charged Diesel engine and multi speed gearbox. Jaguar Land Rovers purchase by Tata in 2008 saw the company which started as an offshoot of Rover Group in 1948 begin a new era which will largely focus on exports to growing markets. Land Rover is the worlds second oldest four wheel drive manufacturer, after Jeep. Whether carrying celebrities to gala dinners in London, or farmers to market day in Cirencester, products, designed and built by this most British of brands does it in style. Creating new jobs for designers, engineers, service and office staff at its design centre in Coventry, and manufacturing jobs at its factory in Solihull, Jaguar Land Rover Group are on the up! The company looks to be going from strength to strength. A powerful British brand which is getting more powerful every day. What many people forget is the huge numbers of SMEs who support car making. It’s not just about the large producer. Vehicle manufacturers generally, source all sorts of products from a myriad of small suppliers who manufacture parts to a highly bespoke specification. SMEs are the lifeblood of the British economy. We have always been a country of entrepreneurs, so start ups and SMEs are nothing new. Encouraging new business is essential to the economic well being of any nation so creating an entrepreneurial climate should be at the forefront of the Governments thinking. Small engineering works exist throughout the UK and produce an amazing array of products from kettles to vacuum cleaners. In the process they employ thousands of people and stimulate the economic performance of the country. There are 4.9m businesses in the UK which provide over 23m jobs and produce ?3.3bn in turnover. Of these, SMEs account for 99.9 per cent of all private sector businesses, 59.3 per cent of all private sector jobs and 48.1 per cent of private sector turnover. Never let it be said that we’re not a nation of entrepreneurs! The nation cannot spend money it does not have and these unique businesses, and the people running them, are helping create a more secure future for us all, as are the dedicated people employed within them. There are nearly 900,000 businesses within the construction industry alone. People like electricians, plumbers, surveyors, estate agents, plasterers are often small businesses with fewer than five employees. Most punch well above their weight when it comes down to effort, hours worked and risks taken. This brings me onto risk. It is essential if we are to allow people to take the risk of using their home as collateral for business loans that they are made fully aware of the risks associated with that procedure. In my opinion I believe legislation should be enacted where anyone party to the perceived risk always receives full and proper advice in the form of a personal interview. Not just a written form outlining their responsibility should they default, a proper interview and assessment so that the risks are fully understood and explained in conversation. A wife or partner should be as aware as her husband of what the pair is agreeing to. The same applies in reverse of course, and in civil partnerships. Creating more businesses is hugely important but it is surpassed by making sure that they survive and grow. Teaching people how to manage risk properly will benefit everyone including the lenders because no responsible lender wants to oversee a default. Dr Stephen Fear,?Entrepreneur in Residence and Ambassador, British Library. Image source