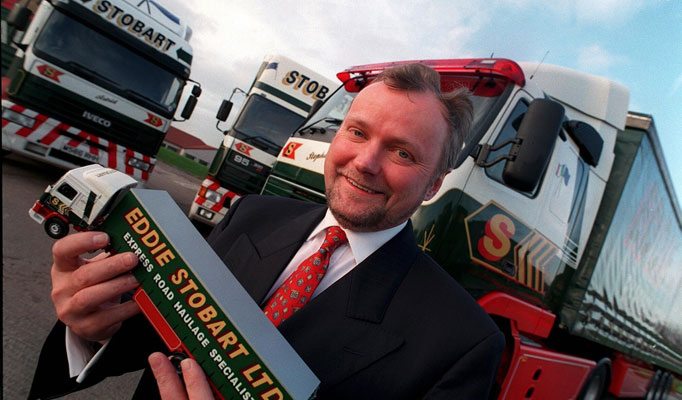 Eddie Stobart died from heart failure in hospital in Coventry yesterday at the age of 56.

Eddie Stobart built up logistics company The Stobart Group, which was founded by his father, also named Eddie Stobart, in the 1950s.  He was the driving force behind making Eddie Stobart one of the country’s biggest brands, and earned the Carlisle-based company its reputation as Britain’s “King of the Road”. Eddie Stobart sold the business to younger brother William Stobart and his business partner Andrew Tinkler in 2004, after spending more than 30 years as managing director. He is widely recognised as having smartened the trucking industry’s image. A statement from the Stobart Group says: “Edward built Eddie Stobart Ltd into the iconic brand and business we know today. Our thoughts are with Edward’s wife Mandy, his children and family at this difficult time.” John Timpson, chief executive of Timpson, reacted to Eddie Stobart’s death: “By a strange coincidence, I was thinking about Eddie Stobart only last week. I’ve always been inspired by the way he made a Stobart lorry stand out from everyone else on the road.  “Who would have thought that a haulier would have a substantial fan club with members willing to buy miniature trucks in the company livery. He showed us how to set a standard for excellence that motivated colleagues and customers alike and gave many of us in business the confidence to insist on a pride in appearance. That’s why I still insist that our branch colleagues wear a tie.” The firm celebrated its 40th anniversary in November.