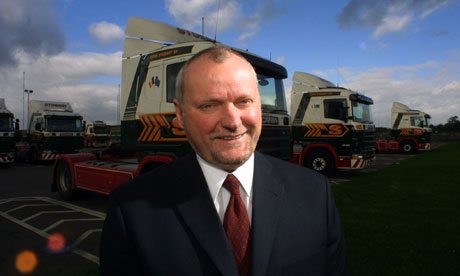 Edward Stobart’s eponymous haulage firm is a national institution and his lorries are as common a sight on British motorways as traffic cones and roadworks ? but far more appreciated and respected by the travelling masses.

He did some great things and so many other companies have followed in their footsteps ? Pimlico Plumbers definitely being one of them. There are a lot of differences between Edward Stobart and myself in terms of character and personal public profile. I?m more than happy to be the front man for Pimlico, while Edward let his brand alone do the talking.? However, there are some striking similarities in how we created and evolved our respective businesses and how they are perceived by customers. He was a real pioneer and well ahead of his time by making sure all his drivers wore a collar and tie behind the wheel, as well as maintaining an immaculately clean fleet of vehicles. ?? This was so far removed from haulage firms of the late eighties and early eighties and really set Edward Stobart head and shoulders above the rest. At the same time, a few hundred miles away in?London, I was doing something similar. Putting plumbers in uniforms and making sure they turned up in sparkling-clean and tidy vans flew in the face of the accepted perception of engineers turning up in rust-ridden vans showing their builder’s bums. I loved the way Edward Stobart named his huge and bulky vehicles with girls? names, which added to the fun for all the country?s many “Stobart Spotters”. We?ve continued the tradition with our vans? plumbing-related number plates, which have made them a popular sight in the capital. Someone said to me recently that they?ve started playing “Spot the Pimlico Van” on the streets of London, when they?re not on the nation?s motorways being a “Stobart Spotter”. To have my fleet of vans mentioned in the same breath as Edward Stobart?s lorries is a massive compliment. I am sure Edward Stobart’s cloud in heaven is?already branded?with an Edwart Stobart logo and he’s sorting out the logistics at the Pearly Gates!? He was an icon of British business and his legacy will live on on?Britain?s highways. He will be sorely missed.