As the daughter of News Corp media magnate Rupert Murdoch, Elisabeth has both founded and been part of global organisations throughout her career.

Having set up her own television production company, Shine, it was bought by her father in 2011 for £415m. That signalled a return to the board of News Corp for the first time since 2001, when she had a disagreement with the management of British Sky Broadcasting (BSkyB), and forged out with her entrepreneurial ambitions.

In a statement to the stock markets, where Jimmy Choo is a member of the FTSE 250 community, chairman Peter Harf said: “We are very pleased to welcome Elisabeth to the board of Jimmy Choo as she brings a wealth of experience.”

Jimmy Choo was set up by Jimmy Choo and Tamara Mellon in 1996, and grew to a multi-million pound fashion enterprise before being part-sold to Equinox Luxury Holdings in 2001. At that point, Choo left the company.

In 2004, Lion Capital acquired a majority shareholding, after which it was then flipped to TowerBrook Capital Partners for £225m in 2007. Finally, it was bought by Labelux for £525m, an investor which took Jimmy Choo to the capital markets through an IPO in October 2014.

Mellon announced she was leaving the company in 2011 on the back of the Labelux acquisition, and the brand is currently headed up by Pierre Denis – who was made CEO in July 2012 and has had previous experience at LVMH and John Galliano.

It is as yet unclear what Elisabeth Murdoch will be helping Jimmy Choo achieve, but it may decide to leverage her extensive experience in the media and marketing space.

Read more about the business of shoes:

Former football star Louis Saha: “We need to put an end to gangsters and sharks” 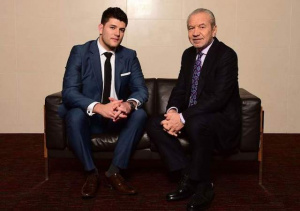