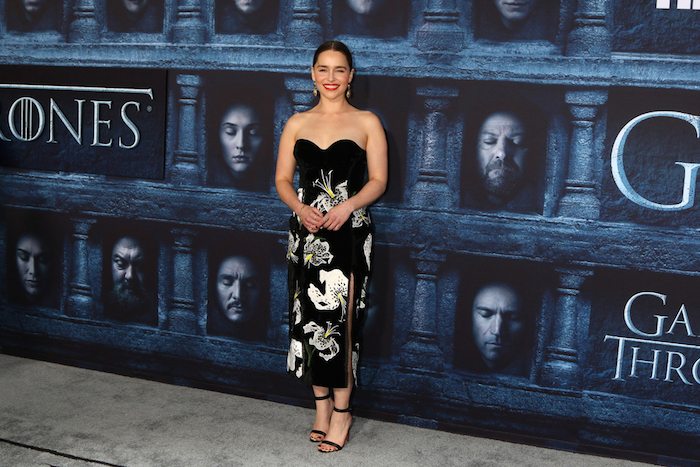 Share via
Now aged 30, Clarke?s interest in acting started at the age of three. But it wasn?t until 2011 that she rose to fame in Game of Thrones as Daenerys Targaryen, a character who would come to possess the fearsome title Mother of Dragons ? among many others. Her role on Game of Thrones has secured fans globally and she boasts 8.7m followers on Instagram alone. And despite only posting one tweet since April 2013, Clarke has 535,000 Twitter followers. Additionally, she?s been able to break out on the big screen in other powerful female roles, such as the gun-toting, robot-blasting Sarah Connor in Terminator Genisys alongside Arnold Schwarzenegger. But, as Wednesday 8 March 2017 marks International Women?s Day, Clarke spoke out against inequality. ?My life has been shaped by a true sense of equality; it was never an overt ?for crying out loud Emilia is just as capable as her brother!? it was simply etched into every action, choice, and behaviour of my family,? she wrote for Huffington Post. ?It was a recognised matter of fact that I, as a woman, was no different to my brother. Just as my mum was no different from my father in their careers, therefore I was raised in an equal earning, equally managed household that showed me anything a man could do, a woman could and should do too.? The Game of Thrones actress went on to say that, while she didn?t know this at the time, that upbringing has empowered her as a feminist. Clarke also highlighted The Women?s March that took place in January following Donald Trump?s presidential inauguration and claimed it?s ?giving us all the lead to see what we can do to make this a change that?s here to stay?. Recognising that she has a platform and a self-imposed duty to speak out, the Game of Thrones protagonist said her roles also offer ?insight into what it feels like to be a woman who stands up to inequality and hate?. Clarke is raking in a reported $500,000 an episode??for Game of Thrones. This matches fellow leading co-stars Peter Dinklage (Tyrion Lannister), Lena Headey (Cersei Lannister), Kit Harington (Jon Snow) and Nikolaj Coster-Waldau (Jaime Lannister), suggesting there is no struggle of a gender pay gap at HBO. Arguably, it could be quite easy for Clarke to close her eyes and shut herself off to what?s going on around her, but that?s not part of her character on screen or off. ?Do I get treated equally at work? Not always. Does every woman? No, and the statistics back that up,? revealed Clarke. ?Do I get asked questions at press junkets by men and women alike, specifically because they will get headline grabbing responses coming from a young woman? Yes.? She is, of course, referring to her nude scenes on the show, which she seems to be quizzed on frequently. And to stand up and change the treatment of women, across industries, is all down to embracing kindness, according to Clarke. ?I believe we all have the opportunity to stand up as women in our ordinary everyday lives. I believe that we all have the power to replace hate with justice, open-heartedness and kindness,? the Game of Thrones actress detailed. That doesn?t need to be exclusively women that make that change either, as Clarke pointed that simple kindness can make an impact against inequality no matter the gender. She said: ?One act of kindness can take your day from bearable to enjoyable in a heartbeat. Because being kind is showing someone that they are seen and heard, and that they do indeed matter. And that?s sexy.? The actress feels that?s something that can be carried outside of gender inequality too, offering kindness to people no matter their race or sexuality. ?Imagine, just for a moment, that we all strive to be kinder to one another on a small, day by day, sincere level, wouldn?t that actually feel really incredible?,? Clarke opined. She said this proposal isn?t a ?big idea?, which is something she?d leave to leaders and politicians ??an interesting sentiment as the Spring Budget also takes place today. ?As I read recently, kindness is sexy, it?s good for us, it makes us feel happy and valued. With my voice, I hope the feminist mind set my family instilled in me becomes the new normal, and boys and girls are raised to know they are equal,? she said. Waving the flag for International Women?s Day loud and clear, Clarke added: ?I believe that one woman?s success, is every woman?s gain. I believe that it is every woman?s choice to be able to live her life how she sees fit… that all of us are girl-bosses and the power of the girl-boss is that we care a bit more about those around us.? The Game of Thrones star?s rallying call is a far cry from Kate Winslet, who previously buried her head in the sand over women?s equality and the gender pay gap, which left many disappointed. ?I am a very lucky woman and I?m quite happy with how things are ticking along,? she said, suggesting the debate was ?vulgar?. Image: Shutterstock