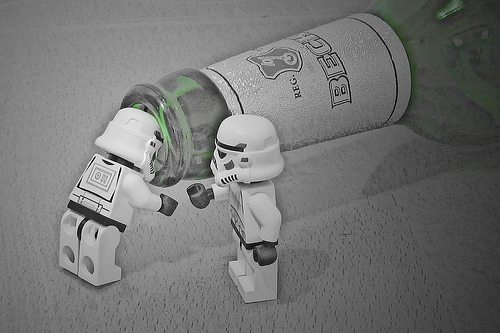 And Lucas is still at it. This time time, however, it’s… beer? Apparently German malt and hops can be confused for an official product.

Microbrewery Empire Brewing Co has been trying to trademark their lager, called Empire Strikes Bock. As it resembles the title of the 1980 movie Empire Strikes Back, Lucasfilm has filed an opposing motion to stop the beer from being sold in other bars. The complaint read: ?Applicant?s EMPIRE STRIKES BOCK mark is virtually identical in sound, appearance, and connotation to Lucasfilm?s THE EMPIRE STRIKES BACK mark, differing by only one letter in the respective last words ?BOCK? and ?BACK,? and the initial word ?THE. ?Lucasfilm has a long history of using such marks for food and beverages, including wine. The fact that consumers have been exposed to and accustomed to seeing Lucasfilm?s STAR WARS Film Franchise marks in connection with food and beverages, increases the already existing likelihood of confusion.?u2028 Monica Palmer, Empire’s director of marketing, however, explains that the name was merely ?a clever pun. We weren’t trying to infringe on anything. We were just trying to make a nice beer with a funny name.” The situation doesn’t seem to have changed the fact that the Empire team is crazy about Star Wars! “Our GM is a huge ‘Star Wars’ fan,” said Monica Palmer, Empire’s director of marketing. “He might be a Stormtrooper for Halloween this year.” May the hops be with you! Image source By Shan? Schutte