Skip to content
Opinion
Share via
My time at Spotify and now my role as a VC meeting with hundreds of startups has taught me many things. One of the biggest learnings is that, as a growing business, all companies experience growing pains. All of them. Many of these are the same, regardless of the particular startup or industry. Things that were true in a startup?s early days don?t necessarily remain that way as a growing business and mindsets have to shift. It?s often a bit of a rollercoaster ride; below I?ve compiled some thoughts on some common growing business pains and how to solve them:

Sorry to say it, but you don?t. It?s an issue that I see time and time again. Founders have fought hard to get where they are. They?ve decided and set the focus of their product or service, hired the initial team, planned the territories to launch in, and more. And they?ve done well, since they?ve got to the position they?re in today. But if you want to continue to rapidly innovate as a growing business, you need to increase the speed of testing, and see ideas for what they are ? ideas. Not all ideas result in positive improvements, even if they?ve had great performance in the past. It?s nowadays a common fact that only about 20 per cent of ideas will prove successful. To increase their odds, founders have to create a culture where their teams are empowered to test ideas, and where they constantly try to shorten the time from idea to test to data to learn. Constantly test them, expect them to ?fail? and learn from the ?failures?.

As a founder, you?ve set some great business goals. But they?ve either been set completely at random or are ? at the very least ? quite arbitrary! In the early days, a startup?s objectives are often set as follows: the founder pulls a goal out of thin air ? ?we should hit 100 million users this year? or ?we have to reach a five per cent weekly growth rate by X?. When anyone questions why, there?s rarely a clear answer. The weekly goal could have been six per cent or four per cent or something else, but five pec ent sounded like a good target. While this way of working can seem great, creating high ambitions and easy measurements to track, it?s not directly linked to the business. Such goals are not only impossible to act upon, but actually end up slowing down your growth. One way to fix this is to rollout a carefully crafted, simple metrics framework. These should be key metrics, built on top of granular raw data and capturing the essence of your growing business. Goals should then be modelled on these metrics, linked to actions, and based on the company?s strategic needs, such as the next round of funding. These metrics then need to be shared with everyone so they know exactly what they?re doing, why, and work out how to get there through testing. For example, for early stage startups that want to scale quickly, there are strong fundraising patterns to achieve. Think about where you have to be and at what time to raise the next round at the valuation you want. You can quite easily back-solve what the product, sales and team all have to look like and how long you have to fulfil this goal. A simple, but often not well-used method.

(3) You?re not the customer anymore

Every founder has to realise at some point that they?re not the customer anymore and needs to start building things for other people. This can be painful, but not as painful as making the decision to remove features you think are great, but other segments just don?t get. You need to get into the minds of your customers, embrace true customer DNA and gain in-depth understanding of the context and intent of what your customers do. Use granular tools and data you have at hand, and move from just analysing behaviour to try to understand why they behave as they do and what they actually want to do. Understand different true intents and don?t listen too much to screaming social media users as they?re not representative of your customer base. At Spotify, we discovered that only ten per cent of the time our mainstream users listened to music, they were solely listening to music. 90 per cent of the time they were listening to music while doing something else like running or having dinner with friends. All the situation-based playlists performed far better than genre-based lists, which is contrary to what people originally thought. And lastly, perhaps most importantly, it doesn?t matter how many forks you buy, you?ll never have enough. Always buy five times more forks than you think you?ll need! Henrik Landgren is analytics partner at EQT Ventures 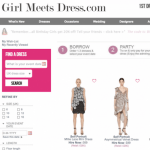 Girl Meets Dress has achieved ecommerce success with its designer dress rental service, but it effectively created its sector, which meant founder Anna Bance had to be adaptive to the challenges she faced.