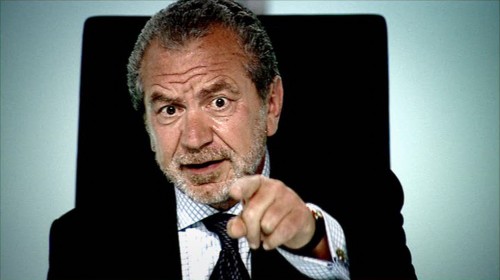 Share via
Prime minister David Cameron has hired Lord Sugar to launch a campaign to encourage young Brits to start their own businesses, explaining that Sugar?s work would be supported by the Department for Education and the Department for Business, Innovation and Skills. Of his appointment, Sugar said: “I’m delighted to be taking on this challenge.?I built successful businesses with the support of hundreds of talented young people who learned their skills on the job???exactly the kinds of skills you learn in an apprenticeship. “But not enough of our young people know about apprenticeships?and what they offer, and too few feel empowered to set up their own business.?I’ll be travelling the length and breadth of this country to tell young people why apprenticeships are a great way for them to build their skills???and talking about the opportunities for starting their own business, hopefully instilling some entrepreneurial spirit.” But his role as enterprise tsar is not a new one. Back in 2015, The Apprentice star’s backing of the Labour Party led him to be crowned as ?enterprise champion? by the then prime minister Gordon Brown from 2009 to 2010. However, after 18-years of involvement, Sugar ?lost confidence? in Labour due to ?negative business policies and general anti-enterprise concepts? ? leading to him quitting the Labour Party. Read more about Lord Sugar: At the time, in a statement made on Twitter, Sugar said: ?In the past year I found myself losing confidence in the party due to their negative business policies and the general anti-enterprise concepts they were considering if they were to be elected. I expressed this to the most senior figures in the party several times. ?I sensed a policy shift moving back towards what Old Labour stood for. By the start of this year, I had made my decision to resign from the party whatever the outcome of the general election.? The full statement can be seen below:

I have resigned today from the Labour party. Full statement here… pic.twitter.com/bzpQsmhVXG

His resignation from Labour had been willingly accepted, he said, ?as they had been aware of [his] disillusionment for some time?. So when George Osborne confirmed the appointment during an appearance at PMQ’s, he joked: “Apparently Lord Sugar has told the Labour Party ‘Your fired!'” Nick Boles, the skills minister, claimed the government wanted every young person in Britain to get on and build a great life for themselves, “whether it?s by starting an apprenticeship or setting up their own business. Lord Sugar has huge credibility among young people and I am delighted that he has agreed to help the government bang the drum for apprenticeships and enterprise.? Meanwhile, Mark Wright, the winner of The Apprentice in 2014, shares the tips he learned after being mentored by Lord Sugar. By Shan? Schutte</a ></em ></p >