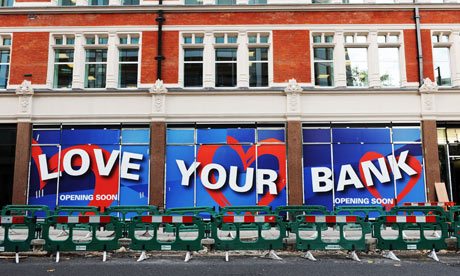 We first wrote about Metro Bank last month, and were impressed by the back-to-basics, customer-oriented approach that it aims to offer.

Now that the FSA has granted a full-service banking license to Metro, Hill can go ahead and start opening branches. Metro’s first two branches are planned to open by the end of June (the first in Holborn and the second in South Kensington), and Hill hopes to expand to 200 London branches within the next ten years. “With the FSA authorisation of Metro Bank, we are entering a new era of banking, one where we go back to a more traditional banking model where customer service is key and there is deposit-based lending,” says Anthony Thomson, chairman of the bank. Metro, which is already promoting its “Love Your Bank” philosophy across various billboards in London, aims to woo customers with seven-day-a-week opening hours, toilets, immediate access to credit card, debit card and chequebook services and even dog food for pets. Banking customers can also rest assured that their money will be safe, as deposits will be covered by the Financial Services Compensation Scheme. Alongside Richard Branson’s Virgin Money, Metro Bank is part of a throng of start-ups hoping to change the face of high street banking in Britain. “The banking environment was fundamentally changed following the credit crunch, and we have seen seismic changes in the retail UK banking industry as a result,” adds Thomson. “Our main focus will always be on customers, both retail and business, and making sure we do the right thing by them. We believe that by providing unparalleled service and convenience, Metro Bank will stand out from the other high street banks.”