In a much-quoted quip, tech writer and publisher Tim O’Reilly compared finance to gasoline on a road trip. “You don’t want to run out of gas on your trip, but you’re not doing a tour of gas stations.”

So where will you get that first full tank to get your business up and running? Among UK SMEs, the petrol station increasingly looks like an equity crowdfunding platform.

According to Beauhurst research, equity crowdfunding makes up a quarter of all UK deal activity by volume. And the increase in available platforms is a marked shift from being consumer-focused to highly specialist, giving SMEs more opportunity to find finance.

As Beauhurst explained: “There’s AllBright, which is sector-agnostic but exclusively backs female founders. Eos Ventures, amongst others, limits itself to fintech. Platforms also specialise by concentrating not just on sector, but on region.”

Don’t jump for the first platform you see just yet. There are different crowdfunding models, on most of which you won’t find typical investors.

Find out what it is and whether it works for your company before making a leap.

What is “the crowd”?

Crowdfunding differs to traditional forms of investment as you appeal to the wider public – otherwise known as “the crowd”.

Through online platforms, individuals contribute a small amount towards a final target that you set.

If we bring back the road trip analogy, think of it as picking up strangers one by one in a van and having each pitch in for a pre-set amount of petrol money.

It’s not a concept everyone is comfortable with. Some prefer the expertise that comes with an investor. Herein lies the biggest difference between investors and the crowd, highlighted all the more by the way you pitch your idea.

When you pitch to an investor, it’s a good idea to have a knowledge of past figures and future estimates at hand. With crowdfunding, personality, USP and creativity are more relevant. An investor looks for proof of scalability – your business foundations are already in place.

Crowdfunding is the perfect place to start a business or scope out a product or idea. You can tap into the crowd’s feedback and create a loyal customer base before the product his the shelves.

A look at the types of available crowdfunding

There are four main types of crowdfunding.

Debt crowdfunding (also known as peer-to-peer lending) – Think of it as borrowing from a bank. A wider pool of actual investors lend money with the understanding that it will be repaid with interest.

Rewards-based crowdfunding – When it comes to this form of crowdfunding, interested parties gain a non-financial reward in return for their investment, such as goods or services.

Donation crowdfunding – As the term suggests, this is where people donate money to a charitable cause.

What is equity crowdfunding?

While crowdfunding itself is a creative campaign to garner interest, equity crowdfunding is a method of gaining finance to start or grow a company. There are subtle reasons why.

Many of the potential investors will be professional angel investors or will have invested before.

With other forms of crowdfunding, you normally offer a reward or recognition in return. Debt crowdfunding requires you give investors their money back.

With equity crowdfunding, however, something larger is at stake: the ownership of your company.

According to Seedrs, “a company raises funds from the crowd in exchange for equity. For the individual investor, this means that when they invest they become shareholders in the company. They, therefore, have a financial share of the rewards of any potential success of that business.”

Also, “as the level of risk is a lot higher, investors may want information, and perhaps even have a more active presence in the day to day running of the company such as, how the money is spent,” said Lending Crowd.

This form of crowdfunding has risks. If the business performs well, share values may rise. If it fails, you risk losing everything invested in the company. There may also be a fee to list your business, depending on the platform.

Setting up a campaign

How to promote an equity crowdfunding campaign Read more

What are the major equity crowdfunding platforms?

So you’ve decided to pursue equity crowdfunding, but where do you go? Here are five platforms for various stages of the business growth journey.

Companies that have done it before

Entrepreneurs that have run successful equity campaigns say it’s crucial to plan how you’re going to promote your idea.

In a 2014 interview with Real Business, Tom Ball, founder of NearDesk – a company enabling people to rent desks by the minute – explained that a lack of preparation led to a failed first attempt.

He said: “We did our first funding in October 2012. That was early days or the concept of crowdfunding, we didn’t do any pre-marketing, we literally put the page live and started emailing people.”

The second time around, NearDesk raised £1 million on equity crowdfunding platform Seedrs. The trick, Ball said, was to have funding already lined up, from existing contacts.

“The biggest thing is to get the first 20% of funding lined up before you go live.

“That’s the good, old-fashioned thing of going to events. If you can’t convince people you already know to buy into your company, you’re not going to do well and you don’t want to be sat there with 0.10% after 10 days.”

Mobile tech company Chirp, which removes the need for the internet by letting users send files through sound waves, launched a crowdfunding campaign on Crowdcube in May 2015. The company beat its £400,000 investment target with a 188% overfund.

With 365 investors parting with their cash for access to a 16.7% equity share, angel and venture capital investment firm GuanQun Investment UK was responsible for the largest deposit at £215,000.

A software development kit (SDK) was being created, designed to let third-party owners use Chirp’s tools to add sound-based sharing to their own content.

The Chirp team specified the importance of keeping communications going during the campaign, ensuring the product’s progress.

By doing so, Chirp reached an investment figure of £752,530, which was used to scale the company commercially.

Talking to Christopher Goodfellow, Phil Stevens, co-founder and COO of Wayv Technologies, unveiled how he sent out a one-page prospectus.

The aim was to find out what investors thought of the business idea and change it if need be.

“We never asked someone directly to invest,” he said. “We just asked them to take a look or pass it on to anyone who might be interested. It talked about the tax incentives and said if you want to get involved we recommend you sign up before we go live.

“We followed up when we’d passed due diligence and then on the Monday of the week we were due to go live, said again ‘please pass this on’. Then sent out another alert on the morning, saying we were going live at 4pm.”

Letting investors know about the incentives paid off. Through the alerts, investors knew what the campaign schedule was – and what more they could get out of it.

Within two hours of going live, an investor asked the company to “box the campaign off”. The investor wanted to complete the investment, a route Wayv chose not to go down – friends and family wanted to be involved. Wayv’s campaign still funded within 24 hours. 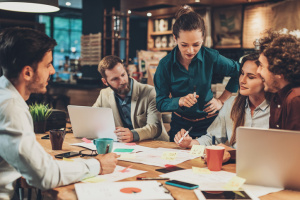 A fun way to help your team grow awareness and motivation