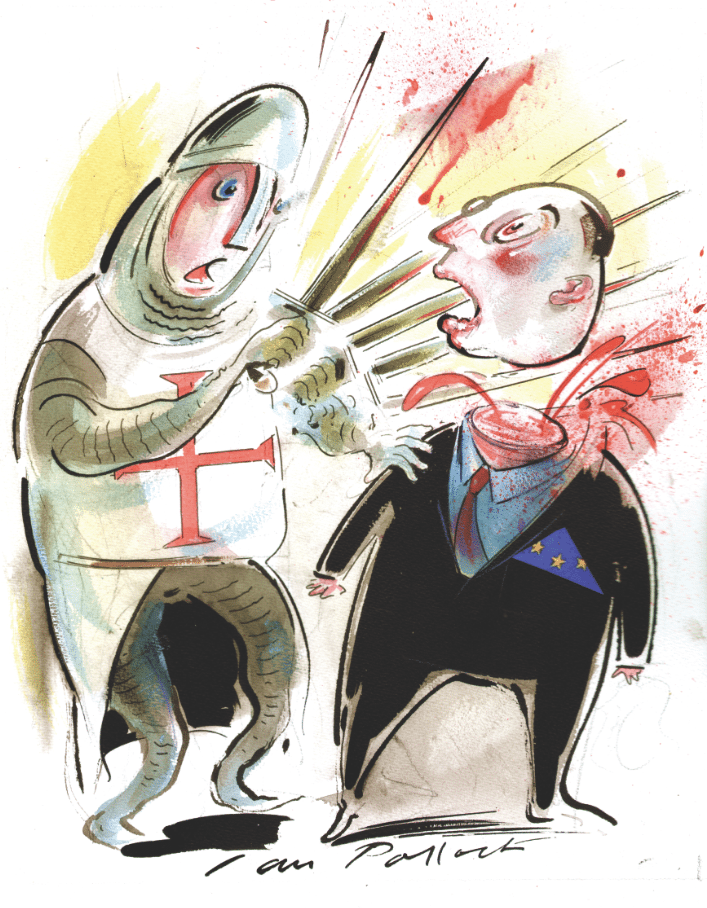 Where you and your colleagues do not stifle business and innovation with petty laws, pointless restrictions and meaningless bureaucracy, you erode the cultural fabrics of your constituent nations with absurd laws on immigration and human rights.  You have made war and enmity in Europe more, not less, likely, as the old stereotypes – lazy Greeks, corrupt Italians – are renewed with a new, foreboding edge. And you have made every European taxpayer poorer, some of them to the point
of destitution. What’s more, you have no mandate from the people of Europe. You are terrified to allow a vote of any kind about European governance because you know that in every country, the electorate’s views are wholly at odds with those of the cossetted political elite.  No-one feels the effects of Europe’s bizarre obsession with lawmaking, and its determination to interfere with the free market, more acutely than business owners, their hands tied and their profits plundered by senseless working-time directives and endless nannying.  What makes it particularly difficult to stomach for Britain’s struggling enterprises is the hypocrisy and wastefulness in European government. Tales of profligacy in the upper echelons abound and are too numerous even to summarise: it is part of the culture of Brussels. In 2010, the Court of Auditors refused to sign off the EU’s budget for the 17th consecutive year, citing discrepancies in 90 per cent of the previous year’s spending. That’s almost two decades’ of breathtakingly brazen behaviour towards the 500 million citizens who suffer under this dictatorship. In June, a time when many countries were starting to implement austerity budgets, Herman Van Rompuy and Baroness Ashton, president and foreign minister to the Union, flew to the same meeting in Russia in separate private jets. The reality is that there is one rule for our remote European overlords and quite another for struggling families and businesses, whose money is wasted by the billion on ludicrous green initiatives, and armies of clipboard Nazis required by a never-ending torrent of bonkers EU directives. Given European leaders’ spectacular mismanagement of the global financial crisis, and their refusal to accept that the preposterous Euro project is hindering the happiness and prosperity of every nation it touches, it is clear that the mechanisms of the EU are an actively pernicious influence on the continent. How far we have come from that time when Eurosceptics were considered a lunatic fringe! Now,  anyone with any sense – and certainly anyone with a vested interest in business – can see that Europe is the single biggest obstacle to economic recovery in the UK. So long as the freedom to be agile, to innovate and to compete in a global marketplace is hampered by this kleptocracy, we will not achieve the robust recovery necessary to return our economy to health and growth. A healthy private sector, unencumbered by unnecessary taxation to fund pointless projects and unhampered by excessive legislation to keep Brussels functionaries in their jobs, is the only way we can achieve prosperity. Things are reaching a crisis point. In Britain, particularly, the people want out. We have never understood the EU, as Nicolas Sarkozy rightly pointed out on Newsnight recently. It is quite alien to us why Europe should regard more loans as the answer to debt, and why Greece is being given any more of our money when it is in neither Greece’s, nor our, interests. Those of us who looked on in horror as Labour drastically and disastrously engorged the state in the 13 years after 1997 know that all bureaucracies ultimately have only one objective: to maintain and increase the employment and comfort of their own employees. Europe is the largest example of this. But with the inevitable and impending fall of the euro, surely now is the time to admit that it – along with the vast, bureaucratic hell of Brussels – must be wound down?  A logical first step in this process would be your immediate resignation, together with a fulsome apology for the grotesque excesses of the Commission under your tenure. Yours, British business
Writer and broadcaster Milo Yiannopoulos occasionaly writes a regular column for Real Business.