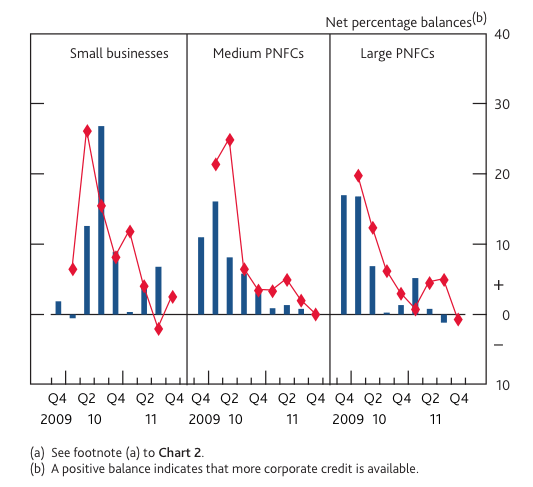 Share via
The Bank of England’s Credit Conditions Survey for Q3 2011 paints a “somewhat gloomier picture” of lending conditions in the UK, with lenders reporting that loan covenants and collateral requirements were expected to tighten further in Q4. While access to credit remained “broadly unchanged” for medium-sized (£1m<£25m turnover) companies in the last quarter, availability was "slightly higher" for small businesses (<£1m turnover). A key message in the survey is the acknowledgement that banks’ lending decisions are directly influenced by which sector businesses are. The report says: “Some lenders noted that uncertainty surrounding future growth prospects had led to differentiation between industries perceived to be more or less risky in the current economic climate.” In other words, if you’re in sector perceived to be more risky, your odds to get credit are lower than if you were operating in a safe industry. Talk about painting with the same brush. Yet demand for credit remains. Lenders reported a “slight pickup” in demand from medium-sized companies in Q3, which was “noted to reflect demand to replenish working capital following the depletion of cash reserves”.  Furthermore, while the availability of credit is expected to remain “broadly unchanged” in Q4, demand is not. Lenders expect a fall in demand across firms of all sizes next quarter.