Skip to content
International Trade
Share via
ATG Access is a manufacturer of security products, in particular vehicle barriers that protect people and buildings from vehicle attack. With incidents over the last year making it a very timely product, countries across the world are now looking to shore up defences. The result of this has been considerable global success for the young company. Although ATG Access is still a small business, it sells into 25 countries every year and generates half of its turnover through exporting. It?s growth and internationalisation saw it scoop Export Champion of the Year at the Amazon Growing Business Awards in November, a programme run by Real Business since 1998. We caught up with Gavin Hepburn, sales and marketing director, to find out more about the business? export story. ATG Access ? Ready to export The business started exporting ten years ago when it turning over a few million pounds ?The products are quite an easy sell in that it?s very easy to explain what they do to most countries,? explained Hepburn. ?We identified some key markets we wanted to go for, got on planes, attended exhibitions, set up meetings with partner companies and started building a partner network around the world at a very early stage ? and it was that ?can do? attitude that got us to where we are now.? In order to identify the right markets, the business looked for countries with a high GDP that respected British standards, such as countries in the Commonwealth, and some nations in the Middle East. It also targeted countries that had some sort of security threat. The challenges of exporting As with any big venture, exporting comes with its risks. ATG tried to minimise this by signing manufacturing partners in some of its main regions. ?By being able to have a good subcontractor network we were able to reduce the risk to the business ? if we got a big order we could pass that on, and obviously the manufacturing partners could cope with that. If we didn?t get the orders for a few months, we don?t have the big overheads of running a factory,? said Hepburn. ?We concentrated more in the value-added engineering, sales and after-sales ? but the actual heavy manufacturing we tend to outsource.? The biggest challenge to going global for Hepburn and ATG Access is simply perseverance. ?It can take a long time for new products and new ideas to be adopted in different countries. One of our best markets now is Singapore, but from when we first visited Singapore in 2007 it was almost 2010 before we got our first order. ?It was taking a really long time and we were starting to question whether anything would come of it, but if you stick in there is business to be had in most countries.?

The Brexit boon For many, the current climate feels too risky to begin exporting ? especially to Europe, as it is impossible to know what a trade deal will look like. However, for ATG Access, Brexit has been a positive thing so far. Hepburn explained: ?The pound has dropped in value, which has made up very competitive against the American and European competition. At the moment, Brexit isn?t hurting us. ?The Middle East is our biggest market, followed by Asia and Europe, so actually Europe has not been traditionally a very strong market for us. We are growing, that?s the market we are growing fastest in, so there is a bit of risk if there?s some difficulty trading with Europe, but I can?t see that happening.? So overall, what is the best thing about exporting? There are of course many advantages on both a business and a personal level. ?Exporting is great fun. I?ve probably been to 60 countries now because it?s such a globally orientated business. You get to go to some really interesting places and meet some lovely people. It?s been a lot of fun jumping in planes, going to different countries,? said Hepburn. ?It?s not boring, that?s for sure.? 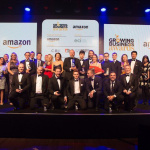