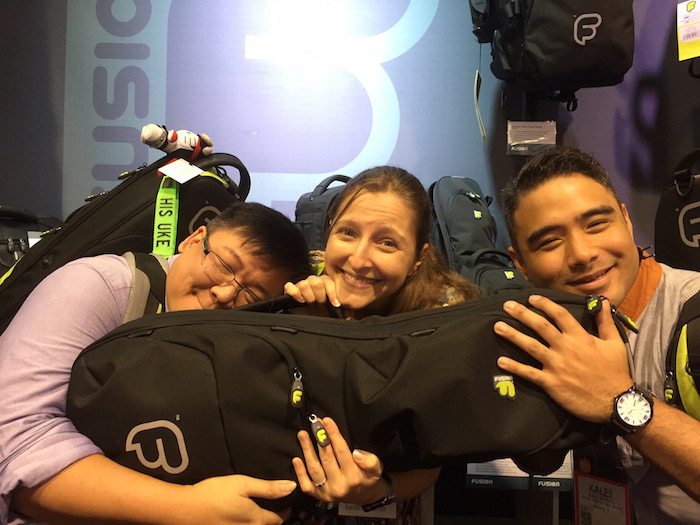 Share via
In 2016, our Fusion bagpipe bags were the biggest worldwide seller outselling guitar and ukulele bags something served as exporting advice in itself. Our unique Fuse-on system lets musicians keep their hands free when they travel. It’s so popular with Fusion’s fans that the team affectionately describe some of their customers as ?groupies. There’s a timeless appeal in playing a musical instrument. Whether to entertain friends and family, to perform in public or simply for personal satisfaction, the popularity of playing music for adults and children has never waned. New trends have grasped the public’s imagination alongside old favourites such as the guitar: the world is going crazy for bagpipes and ukuleles right now. But transporting your instrument safely hasn?t always been easy for musicians, which was why three friends and I launched Fusion in 2008. We ve picked up a lot of exporting advice since then, and we re selling bagpipe bags to Brazil, guitar bags to Germany and, of course, ukulele bags to the US. In fact, we sell 80 per cent of our 100 products outside of the UK, with our bestselling countries the US, Germany, Switzerland, Norway, Hong Kong, Singapore, Turkey and Israel. As we ve managed to secure a global business, I wanted to share exporting advice with fellow company leaders that may be looking to scale overseas.

Fusion’s international success all started when we booked a small booth at the Music China Show 2008 in Shanghai to reach an international audience. That put the pressure on: we d formed the business at the start of the year, but when we booked the booth still had no products or prototypes. Trade shows are a great place to contact your potential prospects. You can speak to them personally and find out what they want. They might just be looking for what you can offer.

(2) Exporting advice: Set yourself ambitious goals, but make sure you break them down into component stages and set realistic deadlines

Booking a booth at an international show meant that we needed to learn fast. As founders, we had backgrounds in designing beautiful and functional products, but needed to teach ourselves about international trade, marketing, logistics and sales. The Music China Show was the experience of a lifetime. We launched our business to the music industry, having developed 100 products and the response was overwhelmingly positive. We returned, overjoyed, to the UK with five distributors from multiple continents signed up.

The interest we got at the trade show didn?t just happen. We had prepared meticulously, and had sent letters (not emails!) to potential distributors worldwide. This is our third piece of exporting advice: use direct mail especially, unusual ?lumpy” mail. Our letters contained personal invitations to meet at our booth at the Music China show. Each was hand-signed and contained a rubber keyring with our logo and website address, plus a brochure. This was a low cost but highly effective marketing method. Some distributors made an appointment to meet at the show, some contacted us years later to show interest in buying our gig bags but all of them mentioned our letter with the rubber keyring. The keyring helped our letters stand out from the piles of mail that they would have received. Next, we booked space at the other major trade shows in the US and Germany. Once we d attended those, Fusion had 30 distributors in over 30 countries. On the next page, read on for the final three exporting advice recommendations, including why you should avoid vanity projects.