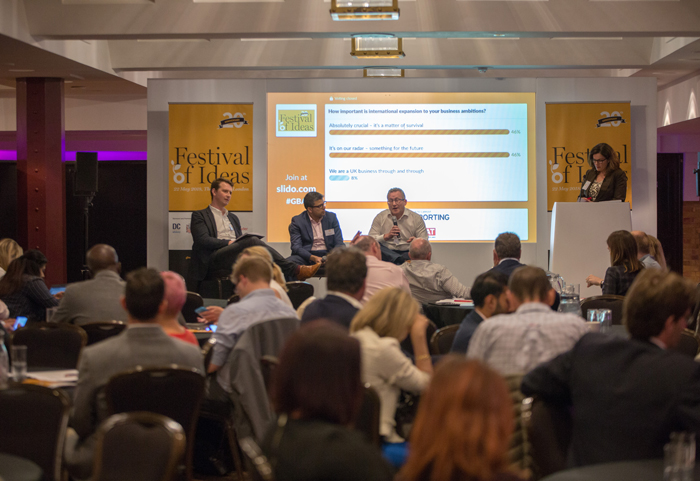 Share via
In preparation for the 20th annual Growing Business Awards, which will be hosted this year at the Brewery, London, by Amazon and Real Business, the Festival of Ideas was held to bring together alumni from a range of industries. The Festival of Ideas included a series of panels and breakout sessions, giving the 120 entrepreneurs in attendance the change to network with likeminded, growth businesses. The day concluded with the ?Have you say? panel, an interactive voting session, chaired by Tanya Beckett from BBC World News. Panellists included Saurav Chopra, co-founder and CEO of Perkbox, Simon Duffy, co-founder of Bulldog Skincare for Men, and Bob Skerrett, managing director of Trak Global Telematics. Here are some of the highlights from the audience and the panel from the session:

How important is international expansion to your business ambitions?

46% of the audience said it?s a matter of survival, while?46% said it?s something for the future.

The audience results showed an even split between ?absolutely crucial? and ?something for the future?, demonstrating a real mix of businesses in the GBA alumni. For Duffy, none of the options really captured where he is at with his business. He explained: ?More than half of our revenue comes from the UK and it?s also a really fast-growing bit of our business,? he said. The business focussed on growing a really strong UK brand, and then carefully selecting new markets to break into. ?If we lost all of our international business, we?d still have a business that was, within the constraints of the UK, growing.? Chopra echoed Duffy?s thoughts. He too hopes to cement his brand in the UK first, but would be keen to have 50% of his revenues from outside the UK within the next three years. ?What I think Brexit has done for us and for a lot of companies has really given us a nudge to not just look at the comfort countries which are around Europe,? he said. For Skerrett, international expansion has had a helping hand from the UK?s ready-made reputation in the insurance, digital and road safety sectors. ?Our international expansion, such as it is so far ? we?re in about seven territories ? has been driven by people coming to conferences in London, seeing us and asking us to go there.?

What are the biggest challenges you face in growing your business internationally?

Risk aversion is a top challenge according to one in three business owners at the event.

In addition, 28% of the audience said hiring local talent was the biggest challenge, and 17% said Brexit and Brexit uncertainty. Overall, a mixed bag. ?We wanted to be strong in the UK?we didn?t try to take on something really complex from a regulatory basis or a consumer challenge? explained Duffy. In fact, Bulldog exported to Sweden where it could use the exact same products. ?There is a risk when you have your head turned to these exciting international markets that you take your eye off the ball, and I think every business needs to figure out the right time to add in the complexity. ?I am an optimist, and I think you should be taking your brand overseas, just in the right way, in a very considered way.?

What is your biggest challenge when it comes to building a sustainable team??

58% said they can?t find the talent they need for their business.?

?I think most startups and growth businesses should really think about what kind of talent they need, whether they need generalists or specialists,? said Chopra. ?When we were starting off, and we were a really young business, we were looking at getting generalists. Really flexible guys who are bright people, who are flexible, who can adapt to the different domains of our business. That worked really well for us.? Over time, as the business grew, it has started to recruit for more specialist talent.

What do you consider to be the most effective weapons in your armoury when it comes to recruiting a future-proofed team? ?

The biggest pull for recruiting are non-financial perks, good communication and culture, according to 52% of the audience.

Just over a third of the audience voted for work like balance and flexible working, which is interesting ? the financial perks did not seem to make the cut. However, this divided the panel. Skerrett argued that ?it?s easy to assume people are money driven, whereas what gets you up and going to work on a Tuesday probably isn?t that.? However, Duffy recalled a time he was doing well at a job and was offered an experience to reward him for his hard work. ?I just really wanted some cash so that I could save to try and get on to the property ladder,? he said. He acknowledged that it?s probably different for each individual, but that helping your team handle their living costs and rewarding them financially seems like it could be quite motivational. If you think your business has what it takes to win a Growing Business Award, now is your chance! Nominations are open, and you have until the 14th September to nominate. You can find out more about the awards here.   FURTHER?READING? _______________________________________________________________________________